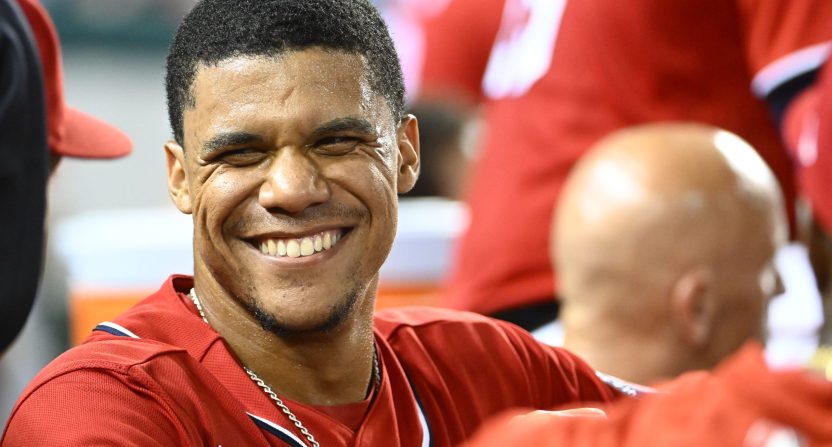 As Major League Baseball‘s Aug. 2 trade deadline nears, the Juan Soto sweepstakes is in full swing as the Washington Nationals are looking to trade their superstar outfielder. Last week, the San Diego Padres were considered the frontrunner in trade talks, but that might no longer be the case as the Los Angeles Dodgers are in hot pursuit.

MLB insider Bob Nightengale reports that while the Padres and St. Louis Cardinals have been considered the frontrunners to land Soto according to most media outlets, the Dodgers have actually been more aggressive in the latest trade proposals.

While the #Padres and #STLCards have been considered the front-runners for Juan Soto, the #Dodgers have been much more aggressive of late in their trade proposals.

Nightengale’s report is echoed by MLB insider Ken Rosenthal of The Athletic, who reports that the Dodgers are very much in pursuit of Soto and could potentially land the star outfielder.

“Don’t rule out the Dodgers on Soto,”  Rosenthal wrote. They have been in contact with the Nationals, and if the Padres make a splash somewhere else, it might create the opening L.A. needs to pull off another deadline stunner.”

The Soto trade talks come after the Washington outfielder rejected a massive $440 million extension to stay with the organization for the foreseeable future. The Nationals were reportedly set to make one final offer to Soto before the trade deadline. If he did not accept, the team was set to trade him.

If the Nationals do trade Soto, it’s clear they will be seeking a heavy return with reports that the team is looking for “4 or 5 top players” that are either prospects or MLB players with low service time.