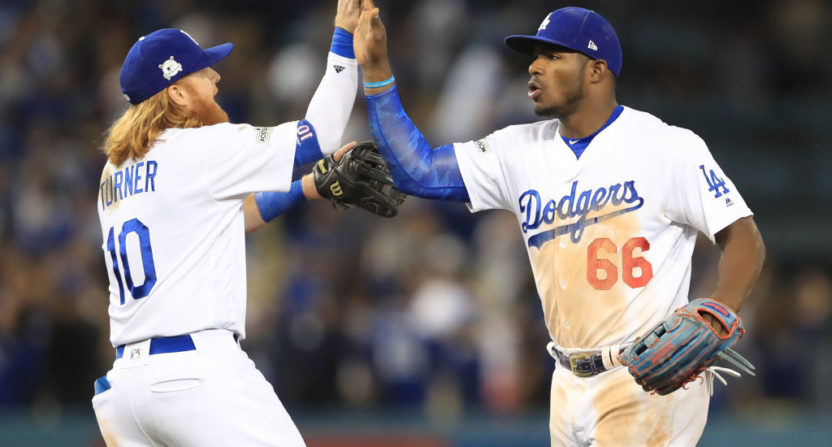 For a team that won an MLB-best 104 games this season, the Los Angeles Dodgers received a curiously light amount of hype entering the playoffs. Not only were the Dodgers not a trendy pick to win the title, but many analysts pointed to their series against the wild-card winning Arizona Diamondbacks as a potential first-round upset.

Most of the skepticism surrounding Los Angeles owed to the team’s lackluster end to the season. After standing 91-36 on Aug. 25, the Dodgers skidded to a 13-22 finish, including a high-profile 11-game losing streak in early September. Teams hope to enter the postseason playing their best baseball, but the Dodgers did the opposite.

These concerns were always a bit illogical. Some of the reason for L.A.’s slide was its conscious decision to bench key players in preparation for the playoffs, and besides, most evidence suggests that how teams finish the regular season has little or no bearing on how they perform in October. And now, three games into the playoffs, all doubt in the Dodgers looks downright foolish in retrospect. Having dispatched the Diamondbacks in consecutive contests, Corey Seager, Clayton Kershaw and company have won nine of their last 10 games and head to the NLCS as a team no one wants to face.

It’s not just that the Dodgers swept Arizona. It’s how thoroughly they did so, leading 24 of the series’ 27 innings and outscoring the Diamondbacks 20-11. L.A.’s starting pitching was solid, its bullpen allowed only three earned runs in 11 1/3 innings, and its offense averaged 10 hits a game.

Looking up and down the Dodgers’ roster, it is near impossible to find a weakness. With Kershaw, Rich Hill, Yu Darvish and Alex Wood, Dave Roberts’ rotation is as formidable as any in the league. The starting staff is so good that Kenta Maeda, who would be at least a No. 4 starter for just about any other playoff team, has been sent to bolster a bullpen that previously had some question marks in middle relief. In a must-win game, he could be a perfect multi-inning bridge to closer Kenley Jansen, arguably the best closer in baseball.

The Dodgers’ offense, meanwhile, is remarkably deep, as the series against Arizona demonstrated. In Game 1, the big names carried the lineup, with Seager, Justin Turner and Yasiel Puig accounting for nine RBIs. In Game 2, it was the bottom of the order, as Logan Forsythe, Austin Barnes and Puig (batting eighth against a lefty starter) going a combined 8-for-12. In Game 3, it was rookie sensation Cody Bellinger with a home run and an RBI single. Even the weaker spots in their order feature useful platoons, with Chase Utley, Barnes and Kike Hernandez spelling Forsythe, Yasmani Grandal and Granderson, respectively, against lefties.

In August it was impossible to look at the Dodgers and see anything but a championship-caliber team. Amid the losing streak, as players like Wood and Chris Taylor saw their performance dip, it became easy to view L.A. through a more cynical lens. But it becomes more clear by the day that the Dodgers’ five months of dominance was more indicative of their ability that the ensuing one month of mediocrity.

Obviously there is no guarantee the Dodgers maintain their NLDS form against the Cubs or Nationals in the next round. If forced to pinpoint soft spots, we might look at the uncertain middle relief corps or Taylor’s slump atop the lineup. And plus, there’s a certain amount of luck in any playoff series. L.A.’s starters could slip up, its bats could go cold at the wrong time or its bullpen could bend far enough that it breaks. Nothing is certain. But if you’re looking for a World Series favorite entering the LCS, Los Angeles is a good place to start. Suddenly, September feels like a long way away.