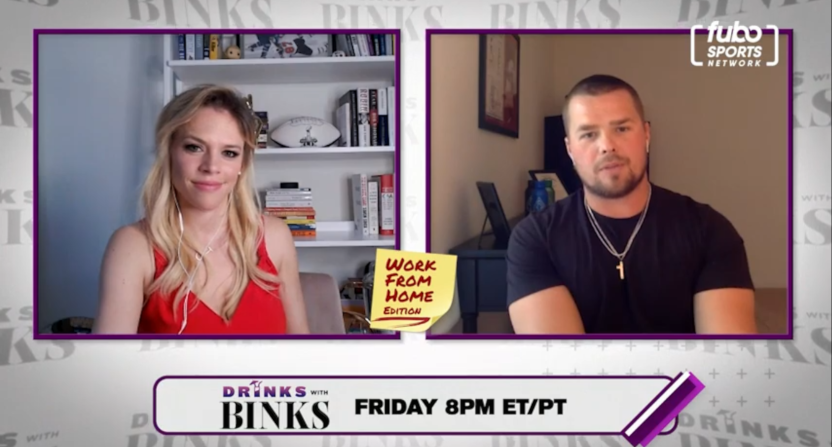 The MLB electronic sign-stealing investigation that started with the Houston Astros and spread to the Boston Red Sox has seen a lot of outraged fans, with many even making a point of throwing at virtual Astros’ batters in MLB The Show. And while there are already some players that have spoken up about it as well, it’s interesting to see more doing that in strong terms. The latest is New York Yankees’ first baseman/designated hitter Luke Voit, who appeared on fubo Sports Network’s Drinks With Binks with host Julie Stewart-Binks this week. The full show airs at 8 p.m. Eastern Friday; here’s a preview clip with Voit talking about his reaction to the scandal, and to how it may impact the technology that players are allowed to use in the dugout.

“It sucks and it’s frustrating and it’s a bunch of BS. There’s nothing you can do about it; it happened, and they gave out the punishment, and a lot of guys are very, very frustrated. And obviously it’s going to be different when ball gets going with how they get treated, and I’m sure they’re going to get booed in a lot of places. [ed note; if spring training is any indication, absolutely.] And hopefully MLB can put a damper on this. But they’re also potentially maybe taking our computers away. And we go down in the dugout and I want to look at maybe footage of my swing, or where the ball and strike was for that at bat.”

“So it’s also putting a damper on everyone else. And it sucks, because a lot of guys use video for their at bats and throughout the season, especially a DH. A DH is literally staring at footage the whole game, because we only play like 10 minutes of the game. It sucks, and obviously there were all guys who got punished, and it came out, but you can’t change history.”

Voit also spoke to Stewart-Binks about how this electronically-aided sign stealing differed from accepted sign-stealing practices:

“Baseball’s always had sign-stealing, right? Maybe it’s the guy that’s at second base trying to steal the catcher’s signs. That’s been a part of the game since I was 12 years old. And that’s different. It’s been like that since 1905 when they were playing. And there’s a way of playing baseball, and then there’s a cheating way, and the Astros and Red Sox went above and beyond with it. And they used what our future has in cameras and stuff to take it to their advantage, and it’s frustrating when those are supposed to be there to help us get better. But, you know what, it happens in every aspect of the world and every business. There’s always going to be cheaters.”

Voit’s full interview with Stewart-Binks will air at 8 p.m. ET/PT Friday on fubo Sports Network, available for free on The Roku Channel, Samsung TV Plus, XUMO and fubosportsnetwork.com.