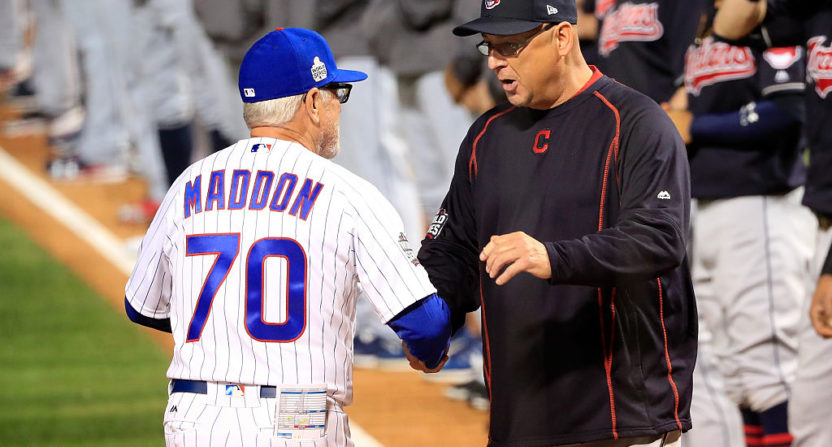 In a game full of objective measurements, there are few more subjective subjects in baseball than the quality of managers. Two fans of the same team could watch 162 games a year and disagree fiercely on whether the man in the dugout is good at his job or totally lousy.

So with that subjectivity in mind, we asked out staff for their choices of the game’s best manager.

Who is baseball’s best manager?

Alex Putterman: My pick is Terry Francona. Players like him for his laid-back personality, reporters like him for his sense of humor, and statheads like him for his acceptance of 21st century wisdom and flexibility on bullpen roles. And most importantly, he wins. Francona has captured two World Series titles and came a few bad breaks from a third last fall. There’s not much more I could ask for in a manager.

Ian Casselberry: My reflex reaction has been Buck Showalter. No one has seemingly gotten more from less, especially during his tenure with the Orioles. Unfairly or not, Showalter shook me with his refusal to use Zach Britton in a key, yet non-save, situation. Yes, it was only one incident, but Showalter’s handling of the bullpen was why I thought he was one of the best.

So my answer is Joe Girardi. Over the past couple of seasons, he’s had to phase out aging veterans like Alex Rodriguez and Mark Teixeira (and all the drama that came with the A-Rod situation) while working in younger talent like Aaron Judge, Gary Sanchez and Luis Severino. The starting rotation has also seen a lot of turnover due to injury, under-performance and age, yet Girardi has been able to shuffle pitchers successfully and keep the Yankees competitive.

Ryan Williamson: Is there anyone better at doing more with less than Bruce Bochy? While the Giants’ every-other-year run came to an end in 2016, it’s hard not to notice all of Bochy’s success. Year in and year out (Well, except this year), Bochy and San Francisco contend despite a mishmash of personnel. To me, that’s what puts him ahead of Joe Maddon or Terry Francona. I think both of those guys are great, but they receive some fantastic support. Theo Epstein put together a superteam of prospects, and the Indians are masterminds when it comes to developing pitching. Bochy is able to do the in-game stuff better than most and pick his spots correctly. That to me is the true test of a strong manager.

Joe Lucia:  I think I’m going to go with Terry Francona. He’s succeeded with payrolls both large and small, is beloved by his players and most people within the game, and seemingly doesn’t feel the need to draw attention to himself and his managing with silly stunts. He’s also great at managing a bullpen and bench, something so many managers screw up on a routine basis.

Liam McGuire: The best manager? That’s a tough one. Bruce Bochy and Bob Melvin continually managed to get good results from seemingly underwhelming teams and players. But for me, the best manager in the game is Bud Black. Black is the best at managing his pitching staff and seems to elevate players around him—without even factoring in the overwhelming success he’s had in Colorado this year, Black would be my pick. Respect to Joe Maddon and Joe Girardi, who are also damn fine at their jobs.