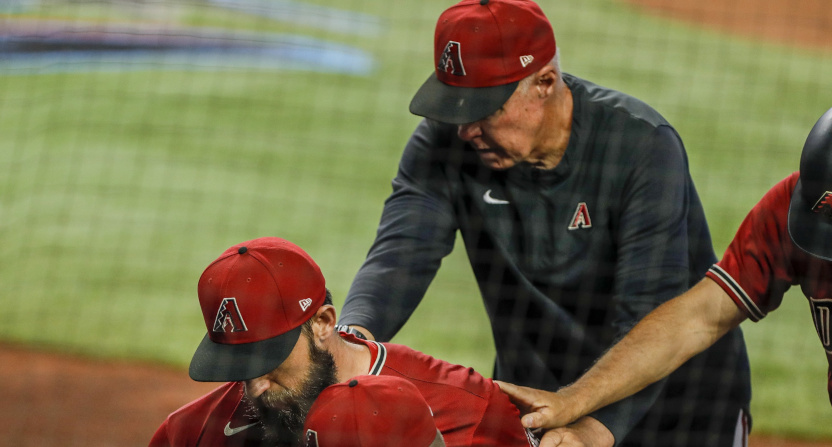 The Arizona Diamondbacks’ pitching situation for their road game against the Miami Marlins Wednesday afternoon played out a little differently than they anticipated. Madison Bumgarner started for the Diamondbacks, but he was thrown out after just one inning after he was checked for foreign substances. However, it looks like the ejection was over comments from Bumgarner to the umpiring crew, rather than over foreign substances. Following that ejection, Bumgarner appeared set to go after the umpires, but he was held back by manager Torey Lovullo (who was thrown out of the team’s previous game, a 5-4 win over the Marlins Tuesday, for arguing a call reversal in the bottom of the seventh) and the team’s coaches. Here’s how Bally Sports Arizona broadcasters Rich Waltz and Luis Gonzalez (filling in for regular broadcasters Steve Berthiaume and Bob Brenly, currently in COVID protocol) covered this:

Waltz and Gonzalez focus on on the seemingly-unusual length of time the umpire looked at Bumgarner’s hand, with Gonzalez saying “The umpire is not even looking at his hand. He’s trying to get a reaction from Bumgarner right here. He’s eyeballing Bumgarner. He’s basically baiting him is what he’s doing. …He wanted him to say something. He wanted Bumgarner. H>e was pushing that button right there. That’s not right.”

Update: And there’s maybe a point there. Here’s a slow-mo clip of that particular part of the interaction, via The Athletic:

A close-up of the interaction between umpire Dan Bellino and Madison Bumgarner right before the ejection.

And a later palm-reading joke about it from the Diamondbacks’ team account:

🔮 "In your future…I see…a sweep." 🔮pic.twitter.com/ZeF5Or6eBr

Whatever happened there, it’s certainly strange. And it drew quite the reaction from Bumgarner, who verbally unloaded on the umpires and seemed to be trying to get closer to them before he was held back by Lovullo and the coaches. He then eventually left the field, as seen above.

This isn’t the first time that Bumgarner has gotten into an on-field confrontation, but only some of those have been with umpires. And this was certainly a high-intensity one, and it seemed to have the potential to get even more intense if Bumgarner wasn’t restrained. But the Diamondbacks did go on to win 8-7, so at least that worked out for them.