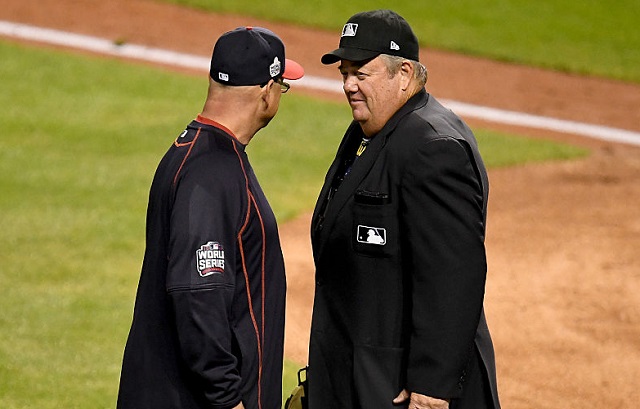 In baseball, when a fielder makes an error, it counts against his fielding percentage. Even if it’s not called an error, it’s counted against his Ultimate Zone Rating, and fans and front offices can use those numbers to evaluate the player. If a pitcher has a tendency to hang curves or leave fastballs in the middle of the zone, that’s recorded too and like everything else, gets evaluated and taken into consideration when it comes time to get paid.

Despite a strong union, players are paid more or less based on their performance and the likelihood of that performance increasing or decreasing in the future. The players’ union has nothing on the umpires.

To be a starter on a World Series team you are almost certainly an extremely talented athlete who has posted incredible numbers all season. To be an umpire in the World Series, you have to be… a major league umpire who didn’t work the previous World Series. From MLB.com:

“All major league umpires are eligible to work any Special Event. The Office of the Commissioner shall have absolute and exclusive discretion in the assignment of umpires to work Special Events…an umpire shall not work consecutive World Series.”

The crew for the 2016 World Series was Sam Holbrook (15.5 years), Chris Guccione (nine), John Hirschbeck (32.5 years), Marvin Hudson (16.5 years), Tony Randazzo (16.5 years) and Joe West (38 years). If experience measured greatness, this would have been unquestionably a solid crew. West is the longest-tenured active umpire and everyone else outside of Guccione has been around at least 15 years. For anyone who wanted an inning of the World Series, however, they were far from perfect.

Holbrook was behind the plate for the most-watched baseball game in a quarter-century, Game 7 of the World Series and the chart above shows how he called the strike zone behind right-handed hitters. We won’t focus on borderline pitches — those are almost impossible to get right consistently — but there are some serious errors here. Squares were thrown by Indians pitchers and triangles by Cubs. There wasn’t obvious bias, two Cubs pitches were well outside of even a favorable pitchers K-Zone and still called strikes, while that green square in the middle about six inches away from the outside corner and eight from the top of the zone really sticks out. Maybe this wouldn’t have affected the outcome, but maybe it would have.

This particular pitch was thrown by Cleveland’s Andrew Miller against the Cubs’ Kris Bryant and one of three in an at-bat in the fifth inning that probably should have been called a strike. If you don’t believe me, look here: 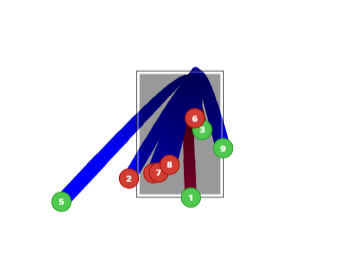 In a battle between one of the best pitchers and best hitters in baseball, the ump show took over and forced Miller to ultimately throw nine pitches, walking Bryant when in all legitimacy, he should have struck out looking on the third pitch in the at-bat. He was not, however, and after the walk, he scored on a two-out single from Anthony Rizzo. In a game that went into extra innings, Sam Holbrook gifted the Cubs a run by not missing one, but three pitches in a single at-bat, including calling a fastball that was nearly right down the middle a ball.

This is not to blame just Holbrook. According to Bloomberg.com’s Umpire Auditor, there were pitches incorrectly called by more than five inches in each of the final three games of the World Series by Joe West and Tony Randazzo. Again, it was not one-sided and FanGraphs’ Jeff Sullivan went deep into every called strike or ball after Game 5 to prove it. The problem is, the calls are still being made incorrectly and umpires essentially never see any recourse for this.

Thanks to PITCHf/x, we can see cumulative stats for these umpires over the years and in 2016, we know that the top five umpires as far as accuracy goes were Tom Woodring, Manny Gonzalez, Mark Ripperger, Chad Fairchild and Mark Wegner. If you aren’t as familiar with these names as you are with those who umpired the World Series, there are two reasons. One, they haven’t been around as long and two, they don’t make it about themselves. John Hirschbeck, however, you probably do know as he was the umpire involved in the Roberto Alomar spitting controversy and was once involved with a MLB suit of the umpires union because he was literally the worst umpire in baseball after the advent of QuesTec.

Things haven’t changed for Hirschbeck as he was one of Major League Baseball’s worst umpires again in 2016, missing 15 percent of calls, tied for second-worst in all of baseball. Luckily for fans everywhere, he is retiring after this season, but that was no reason for Major League Baseball to give him one more chance to mess things up on baseball’s biggest stage.

Of the others in the series, Randazzo was actually pretty good throughout the season and one of the best options, and Holbrook wasn’t bad either, but even the best umpires miss 10 percent of calls at the plate. The bigger problem is that some umpires, like Hirschbeck and Joe West, will aggressively defend these bad calls and make the game about themselves, rather than those actually playing.

Chapman vs Lindor. What did we do before slo mo HD replays? pic.twitter.com/NcThu6z6eA

There needs to be a solution that lies somewhere in between what we have now and the theorized “Robot Ump.” There weren’t any controversial plays on the bases in this year’s World Series because the instant replay system worked perfectly. A play in Game 6 where Francisco Lindor appeared to beat Aroldis Chapman to first and was initially called safe was the perfect example of this. This play was much closer than some of the missed balls and strikes, but video showed clearly that Chapman’s foot came down just slightly quicker than the base runner’s. Lindor was called out and there was no argument from either team as the right call had been made.

Something needs to be done to make this scenario the more likely one behind the plate. One way that seems simple, but has been fought by the umpire’s union since its inception is to reward those umpires who are good at their job and fire those who are not. Even if it wasn’t financially, working the World Series is a reward in itself and yet Major League Baseball sent two of the worst in Hirschbeck and West, just because they had the tenure. If the rest of baseball worked this way, Alex Rodriguez wouldn’t have been commenting on the games from the Fox pre- and post-game shows, but playing for one of the teams as the most tenured player from the 2016 season.

If it’s impossible to separate the good from the bad prior to the time they retire on their own, then maybe it is time for a technological solution. The current replay system has almost completely eliminated on-field arguments and PitchFX is accurate enough that it could be used in tandem with the current system. It’s hard to imagine a way of integrating it that wouldn’t either lengthen the game even further or eliminate the home plate umpire altogether, but something must be done about these umpires.