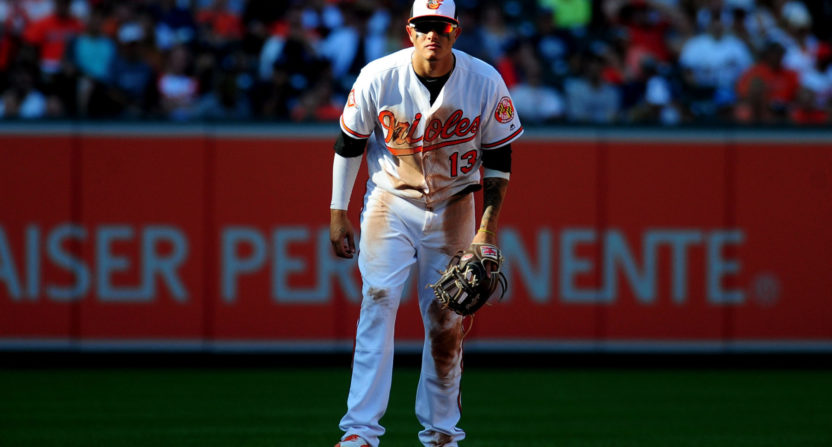 The Major League Baseball offseason has been slow. Very slow. Of the top 10 free agents we identified back in November, only two have signed. Since early December, the only noteworthy move has been the Rockies’ signing of Wade Davis.

Since we don’t have any actual moves to write about, we asked our writers to imagine moves they think should be happening.

What move would make sense for both sides this offseason?

Matt Clapp:  J.D. Martinez to the Red Sox makes perfect sense, and I’m honestly a little surprised it hasn’t happened already. That’s likely more of a case of Scott Boras being Scott Boras and having a crazy asking price that he’s refusing to back off of.

But the Red Sox could really use another power bat, and there isn’t a better one on the market than Martinez. Even if takes a six or seven-year deal, Martinez is a good bet to produce at a high level offensively over the duration of the contract, and he should be one of the very best hitters in baseball over at least the first few years of the deal. His issues are all about defense, where he’s a train wreck. He belongs in the American League as a designated hitter. And it’s unlikely more than another team or two is willing to match what the Red Sox would pay him, and the Red Sox probably offer him the best chance (of the suitors) to win.

Right now, the projections view the Red Sox and Yankees as even teams, so adding Martinez would make the Red Sox appear a few wins better on paper. They can still win the AL East without him, but he’d really give their chances a boost and make their lineup much more dangerous. This signing just feels inevitable.

Alex Putterman: I’ve banged this drum before, but Manny Machado to the Yankees truly makes sense from all angles.

From the Yankees’ perspective, the appeal is obvious. General manager Brian Cashman has built a team that could contend for a World Series in 2018, but he still has a gaping hole at third base that Machado would plug perfectly. Acquiring Machado a year before he becomes a free agent would allow the Yankees to show the All-Star what they’re about before he hits the market and maybe even negotiate an extension with him ahead of time. The fact Machado will carry an affordable salary for one more season should also be attractive to the luxury tax-conscious Yanks.

When I presented these points on Twitter, many fans pointed out that Orioles owner Peter Angelos would hesitate to trade Machado to a division rival. But Baltimore would be dealing away only one year of Machado. If the Yankees are likely to sign the infielder next winter anyway, the Orioles might as well get something in return right now. Angelos may not think about it that way, but that doesn’t mean he shouldn’t. In Chance Adams, Justus Sheffield, Jordan Montgomery and Domingo Acevedo, New York has exactly the type of young, controllable arms the Orioles reportedly seek.

If the Orioles are willing to lower their price to a reasonable level, this potential trade works for everyone involved.

Joe Lucia:  I feel like Lorenzo Cain going to the Giants has been rumored for months, and nearly everyone predicted that the former Royals centerfielder would sign with San Francisco. Incredibly, that still hasn’t happened. The Giants still don’t have a centerfielder after trading Denard Span’s contract to the Rays in the Evan Longoria trade, and that deal tells me that the Giants think they’re contenders.

The team hasn’t done anything aside from acquiring Longoria and dumping both Span and Matt Moore, and if they actually want to attempt to contend for a NL playoff spot, they need to do more — and Cain is the perfect fit.

Ian Casselberry: The Cardinals may have already dealt away enough prospects after getting Marcell Ozuna from the Miami Marlins. But they still have enough resources to get one more big power bat in White Sox first baseman Jose Abreu. The White Sox are in a position of strength here, saying a deal would have to be overwhelming. St. Louis might not have much young pitching to deal, though could build a package around top prospect Jack Flaherty. Maybe Alex Reyes could be included, nearly a year after Tommy John surgery.

St. Louis could certainly offer young bats like outfielders Harrison Bader, Tyler O’Neill and Jose Martinez (who could possibly be an Abreu replacement). Chicago might be more interested in catcher Carson Kelly, but St. Louis presumably want to keep him as Yadier Molina goes into his mid-30s. But getting an outfielder Bader, O’Neill or maybe Randal Grichuk would allow the White Sox to trade Avisail Garcia for more prospects as well.

Trading for Abreu might be too “all-in” for the Cardinals, further thinning out their minor league system. It might be smarter to pursue more starting pitching and relief depth (especially a closer like Greg Holland). Someone like Adrian Gonzalez or Lucas Duda would be a far less expensive alternative to Abreu, while also providing some lineup balance with a left-handed bat. But if St. Louis can still make an impact addition that helps close the gap between them and the Cubs (and maybe the Brewers) in the NL Central.