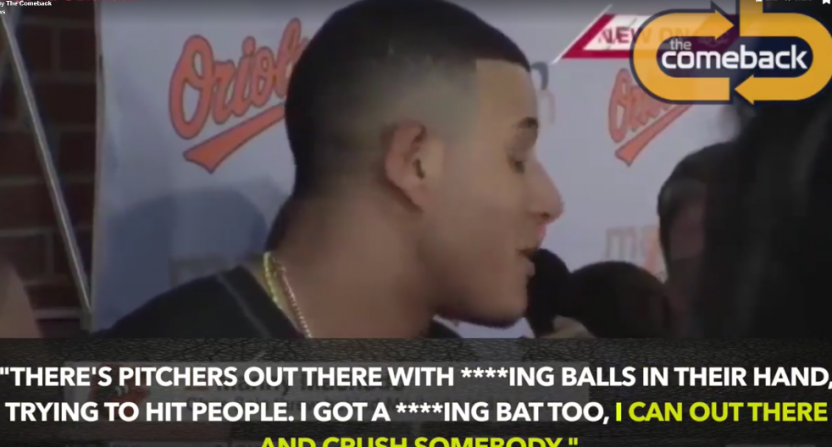 Tension was high heading into Tuesday’s game between the Boston Red Sox and Baltimore Orioles thanks to Boston fans throwing peanuts and hurling racial insults at Baltimore centerfielder Adam Jones Monday. That led to a whole day of debate, with some even questioning Jones’ account of the event. Red Sox fans actually gave Jones a standing ovation when Tuesday’s game started, dulling the fires of that controversy for the time being, but another one soon erupted thanks to Boston pitcher Chris Sale throwing behind Baltimore third baseman Manny Machado.

This came after a long build-up. Machado started yet another controversy two weeks ago with a slide into Red Sox second baseman Dustin Pedroia, which led to Boston pitcher Matt Barnes throwing at Machado’s head a couple days later and getting suspended for four games. Apparently the Red Sox are still upset, as judged by Sale’s throw at Machado Tuesday. And Machado’s upset too; after the game, he went on a profane rant to reporters about Sale throwing at him:

Here’s a transcription of the main rant to a scrum of reporters (part of which is seen at 1:07 in the video), via Joe Rodgers of Omnisport (actual language added):

“That’s stuff that you don’t fucking do,” Machado told reporters after the game. “But I’m not on that side, not in that organization. They are still thinking about that same slide [into Dustin Pedroia]. I had no intention on hurting anybody and I’m still paying — trying to get hit at. Getting thrown at my fucking head, you’re throwing at fucking everywhere. It’s fucking bullshit. It’s fucking bullshit. I’ve lost respect for that organization, for that coaching staff, for everyone over there.

“If you’re going to fucking hit me, hit me, go ahead. Don’t let the shitheads keep fucking lingering around and keep trying to fucking hit people. It’s fucking bullshit. MLB should do something about it. Fucking pitchers out there with fucking balls in their hands throwing 100 mph trying to hit people. I’ve got a fucking bat too. I could go up there and crush somebody if I wanted to. But you know what? I’ll get suspended for a year and the pitcher only gets suspended for two games. That’s not cool.”

And that wasn’t all. In a separate one-on-one interview with Mid-Atlantic Sports Network (which carries the Orioles’ broadcasts), Machado seemed to threaten revenge of some sort:

“I lost my respect for the entire organization and Boston and how they are handling the whole situation,” Machado told MASN after gaining his composure following the tirade. “If they want to hit me, hit me, go ahead. Get it over with, don’t keep lingering it around. I’ve lost mad respect for that team and organization. They are probably going to try to hit me again [tomorrow]. I’m just going to have to wear it and see what happens — if I have to take care of business on my own then I’m going have to do something.”

That’s an incredible rant from Machado, and his position’s understandable. He’s already had one pitcher throw at his head and another one throw behind him, and he very easily could have gotten hurt in either situation. Frustration of this sort seems logical as a result, especially with MLB seemingly not too eager to intervene. But this is certainly a very graphic way to express those sentiments, and the threats in particular might draw some negative blowback for him.