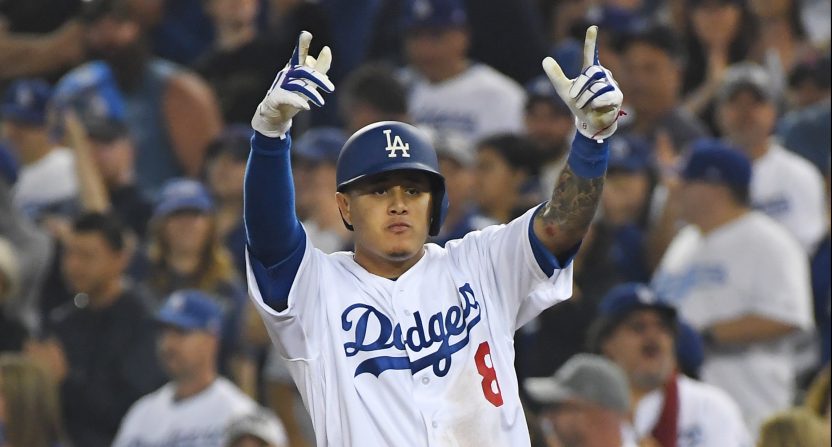 Manny Machado’s time in Los Angeles only lasted half a season, but his time in Southern California will be much longer. According to multiple reports on Tuesday morning, Machado is signing a ten-year, $300 million deal with the Dodgers’ NL West rival – the San Diego Padres.

BREAKING: Manny Machado has agreed to terms on a deal with the Padres. According to a league source, it’s for 10 years and $300 million – the biggest free-agent contract in the history of American sports.

As expected, Machado’s deal contains an opt-out, this one coming after the fifth season.

Opt out in Machado deal is after the fifth year.

Machado immediately becomes the best player on a Padres team that lost 96 games in 2018, hasn’t finished above .500 since 2010, and hasn’t made the playoffs since 2006. The 26-year old slashed .297/.367/.538 in 2018 with 37 home runs, spending the first half of the season in Baltimore and the second half in Los Angeles. He primarily played as a shortstop this past season, though his defense has graded out far better at third base. San Diego could use him at either position in 2019 – their 2018 shortstop was Freddy Galvis (who signed with the Blue Jays this winter), and their primary third baseman was Christian Villanueva, who was released in November so he could sign in Japan.

San Diego isn’t a contender yet in the NL West. Aside from Machado, their only significant acquisitions this winter have been second baseman Ian Kinsler and reliever Aaron Loup. They have a top three (at the worst) farm system in baseball, and a bunch of those guys could start making significant impacts in 2019, including Fernando Tatis Jr (who, like Machado, can play short or third), catcher Francisco Mejia, and pitchers Jacob Nix (who blew through his rookie eligibility last year in nine forgettable starts), Chris Paddack, and Cal Quantrill.

Adding Machado to a major league core that already includes Eric Hosmer and Wil Myers, each of whom is also signed long-term, is a coup for San Diego. Now you can see why the Padres were going so hard after former Marlins catcher JT Realmuto, because adding him to that group would have made them quite fearsome in 2019.

The biggest losers in the Machado sweepstakes have to be the Chicago White Sox, who brought the full-court press towards bringing Machado to the South Side, only to fall short. Chicago was also pursuing Bryce Harper, albeit less doggedly than Machado, and if they want to land one of the big two free agents, they’re going to need to pick up the pressure ASAP, especially with the Phillies waiting in the wings for Harper.