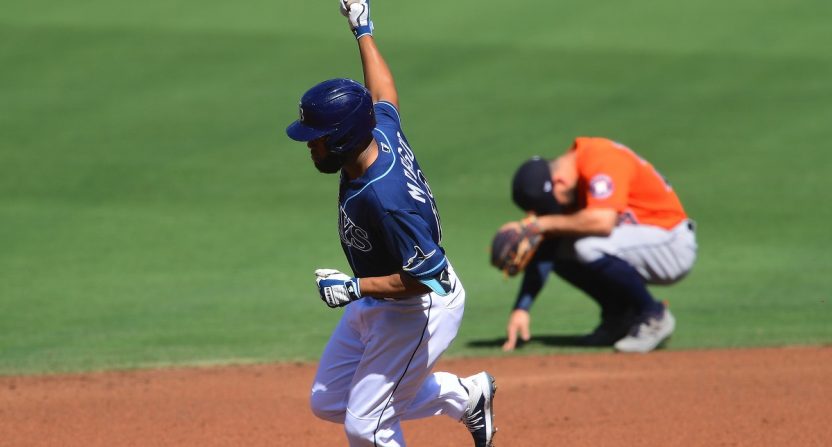 Despite outhitting the Tampa Bay Rays, 10-4, the Houston Astros lost Game 2 of the American League Championship Series, 4-2. Ultimately, the Astros made pivotal mistakes while the Rays made key plays and as a result, Houston is now down 2-0 in the series.

A throwing error by Jose Altuve on a groundball from Ji-Man Choi prevented Lance McCullers from getting out of the first inning unharmed. With the inning extended, Manuel Margot hit a three-run homer that gave Tampa Bay an early 3-0 lead and knocked the Astros back on their heels.

That was really all the offense the Rays needed with Charlie Morton starting the game throwing five scoreless innings with five strikeouts, despite allowing five hits. Pete Anderson served up a home run to Carlos Correa during his two innings of relief. But the Astros just left too many runners on base (11, to be exact) and had some hard luck when scoring chances were available.

Now Manuel Margot makes an incredible catch down the right field line, and flips over the wall! pic.twitter.com/8kXETCCRNv

Mike Zunino added an insurance run for Tampa Bay in the seventh, launching a homer to deep left-center off Lance McCullers, Jr. That extra run — from the Rays’ No. 9 hitter — provided a much-needed cushion for the Rays’ bullpen.

Houston had a chance to tie the game or take the lead in the ninth, loading the bases against Nick Anderson. Yet Anderson got George Springer to hit into a double play. The groundball drove in a run, but it also gave Tampa Bay a chance to escape a bases-loaded jam.

The Astros loaded the bases again on two consecutive walks by Altuve and Michael Brantley. However, Alex Bregman flied out to deep right-center to end the game and finish a frustrating day for Houston’s third baseman.

Alex Bregman's 5 hard-hit outs today tie Anthony Rendon (Sept 16) for the most by any player in any game this year.

It's the first time any player has suffered 5 hard-hit outs in a postseason game since Statcast launched in 2015.

Game 3 of the ALCS is Tuesday (Sept. 13) with first pitch scheduled for the primetime slot of 8:40 p.m. ET. Ryan Yarbrough is set to make his first postseason start for the Rays, while Jose Urquidy makes his third start of the 2020 playoffs for the Astros.

Urquidy was roughed up in his last appearance during Game 3 of the ALDS vs. Oakland, serving up four home runs (and five hits overall) in 4.1 innings. Yarbrough last pitched in Game 4 of the ALDS against the Yankees, giving up two runs in five innings of relief.