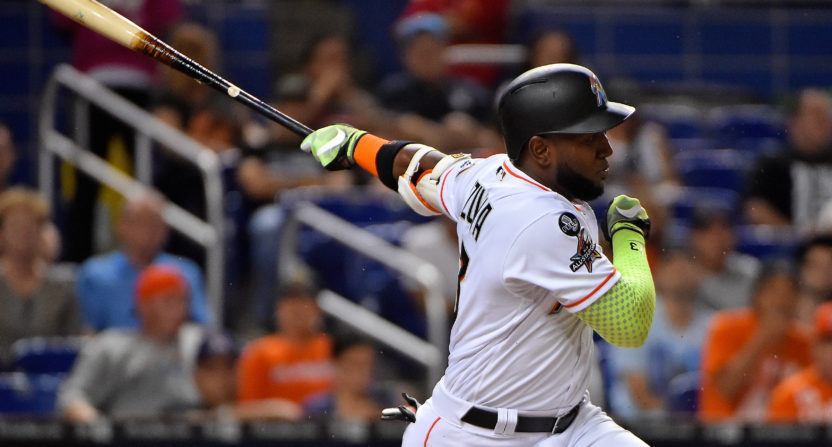 If you thought the Miami Marlins were done after trading Dee Gordon and Giancarlo Stanton, guess again. On Wednesday, Miami sent outfielder Marcell Ozuna packing in a trade with the St. Louis Cardinals.

Source: Marcel Ozuna has been traded to the Cardinals. The deal is pending a physical.

The 27-year old Ozuna had a fabulous year in 2017, hitting .312/.378/.548 with a career-high 37 home runs. This season, he made his second-straight NL All-Star team, won his first-ever Gold Glove and Silver Slugger awards, and finished 15th in NL MVP voting. He’s still under control for two more seasons, and is in line for a hefty raise this offseason after making just $3.5 million last year, his first of three arbitration years.

Dealing Ozuna slashes Miami’s projected payroll in 2018 down even further to an estimate of $95 million, per Cot’s. That’s still not even close to where the Marlins have claimed they want their payroll, so expect the team to look into trading newly acquired Starlin Castro, the oft-injured Martin Prado, and perhaps their last building block left – Christian Yelich. Moving those three without picking up any contracts would cut Miami’s payroll to around $65 million.

For the Cardinals, adding Ozuna is an acceptable consolation after coming up short in the Giancarlo Stanton derby last week. While Dexter Fowler and Tommy Pham each had exemplary years in the outfield for St. Louis last season, the third outfield position, mostly filled by either Randal Grichuk or Stephen Piscotty, didn’t provide enough production. Grichuk hit .238/.285/.473 with 22 homers over 122 games, while Piscotty slashed .235/.342/.367 with nine homers in 107 games. Piscotty was playing under a new contract extension in 2017 that will pay him $33.5 million through the 2022 season, perhaps making him a highly-paid fourth outfielder for the Cardinals going forward.

The return for the Marlins is currently unknown, but we’ll make sure to update this post once the names start leaking out.

1 thought on “Marcell Ozuna is reportedly the latest Marlin to be traded, landing with the St. Louis Cardinals”