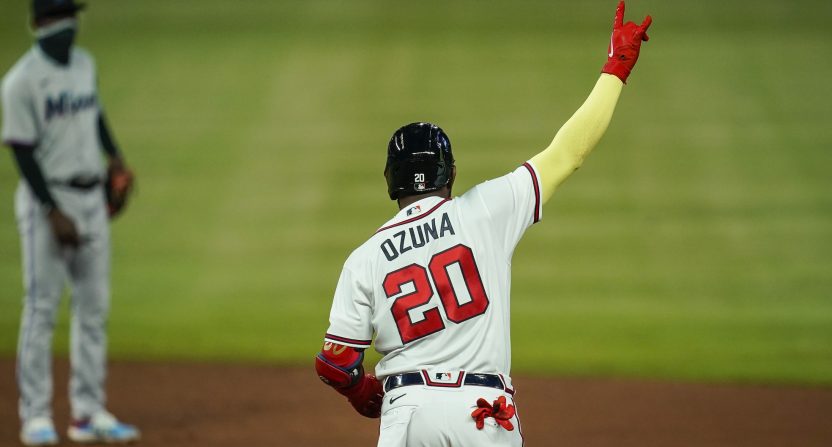 Pop quiz: who leads the National League in home runs?

Another pop quiz: who leads the National League in RBI?

It’s not any of the players mentioned above, nor is it MVP front-runner Freddie Freeman. Nope – once again, it’s Marcell Ozuna.

Ozuna has appeared in all 56 of the Braves games this season, one of three players on the team to do so along with Freeman and shortstop Dansby Swanson. He’s 248 plate appearances rank third in all of baseball, behind just Cavan Biggio and Francisco Lindor. And yet, Ozuna hasn’t gotten nearly enough attention for what he’s done in 2020, despite being on the field every day.

Over those 56 games, the DH that also masks as an outfielder is slashing .327/.415/.626, giving him a .433 wOBA and 172 wRC+. Only Juan Soto of the Nationals (who has played in just 43 games) and Freeman have a higher wOBA across all of baseball, while Soto, Freeman, and American Leaguers DJ LeMahieu and Jose Abreu are the only regulars with a higher wRC+.

I already talked about the homers and RBI – only Luke Voit and Abreu have more homers than Ozuna in the AL, while only Abreu tops him in RBI. Ozuna’s defensive woes have dinged his fWAR, though he still ranks 17th in baseball and 10th in the NL with a 2.1 mark.

But despite all that, Ozuna isn’t being mentioned in MVP conversations. Those talks are dominated by Freeman, Machado, Betts, and Tatis, despite Ozuna having better offensive years than the NL West trio. The Athletic’s Ken Rosenthal didn’t even bother mentioning Ozuna in a column about the MVP race a week ago. Again – Ozuna has been the third-best hitter in the National League this season, and one of the guys ahead of him missed two weeks (not a small chunk of time in a 60-game season) and plays for a last place team.

Ozuna getting most of his time at DH, and not impressing at all in the field, is one reason he’s likely being overlooked. You can look at Nelson Cruz as a prime example of this – last year, Cruz finished second in the AL in OPS to MVP Mike Trout, while also finishing second behind Trout in homers and seventh (ahead of Trout, mind you) in RBI. Cruz’s team also made the playoffs, as the Twins won the AL Central. Yet he finished ninth in MVP voting, behind not only Trout and Alex Bregman (who were Cruz’s peer or better offensively) but also more well-rounded players who were inferior offensively, like LeMahieu and the Oakland duo of Marcus Semien and Matt Chapman.

Another reason is because of how loaded the Braves offense is, with not only Ozuna and MVP front-runner Freeman, but also Ronald Acuna Jr, the mashing Duvall, and resurgent catcher Travis d’Arnaud. This is the same problem Ozuna faced in Miami, when he was thought of as the third-best player in an outfield that featured him, Giancarlo Stanton, and Christian Yelich.

Ozuna’s fWAR this year will fall short of the last two years, thanks to the fact that he’ll only max out at 60 games (as opposed to 148 in 2018, and 130 in 2019), but each component of his triple slash line is career best, and he’s also walking at a career-high clip while lashing balls at a career-high exit velocity and a career-best hard hit rate. Over a full season, Ozuna likely wouldn’t hit this well, but this isn’t a normal season. Ozuna is having an incredible year and should be getting way more love from fans, writers, and the general baseball public. And at just one year and the pro-rated amount of $18 million, the Braves got themselves one hell of a bargain this past winter. Ozuna’s next contract won’t come quite as cheap.