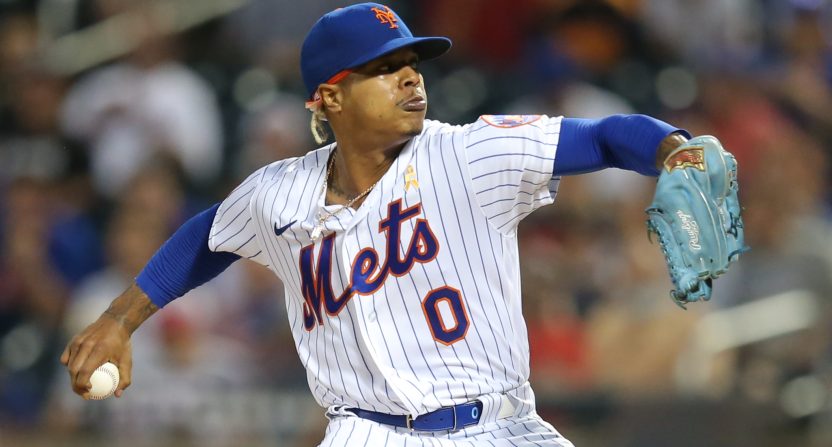 In December of 2014, the Chicago Cubs made a franchise-changing move by signing free-agent star pitcher Jon Lester to a six-year, $155 million contract. The Cubs went on to win 97 games in year one of Lester’s deal, and of course followed that up with a 103-win, championship-winning season in 2016.

Now, that team already had Jake Arrieta, Kyle Hendricks, and Anthony Rizzo in place, to go with the game’s best farm system. The current Cubs aren’t nearly that far along, and they won just 71 games in 2021 after an in-season fire sale (that actually began last offseason with the Yu Darvish trade). But they do have arguably the deepest farm system in baseball and some intriguing — several young — pieces at the big-league level.

And now they have the guy that they hope can provide Jon Lester impact for the next winning era of Cubs baseball.

The Cubs have signed free-agent pitcher Marcus Stroman to a contract, as announced by… Stroman himself. A pretty reliable source!

Chicago has always been one of my favorite cities. Culture and passion everywhere. Beyond excited to pitch in front one of the best fan bases in all of sports. Thank you to everyone in the city for the warm welcome. I can feel it. Let’s get to work! @Cubs

Wrigley Field is the only big league stadium I haven’t pitched at in my career. Crazy. Can’t wait to call it home! @Cubs

And the Cubs *desperately* needed starting pitching- both for 2022 and beyond.

Chicago entered today with only Kyle Hendricks and Wade Miley as for-sure members of the rotation.

Hendricks turns 32 next week and is coming off easily the worst season of his terrific career, with a 4.77 ERA (even with that number, he’s still at a sterling 3.36 career ERA; he’d never topped 3.95 in a season until 2021). Odds are he’s better than 2021 and maybe even very good again, but you never know when players get to this age- and especially when it’s a soft-tossing pitcher that relies on weak contact.

Miley will be one of MLB’s best bargain additions this offseason (one year, $10 million); the Cubs claimed him off waivers from the Cincinnati Reds after he put together a terrific 3.37 ERA in 163 innings for the Reds in 2021. But he’s 35 years old and is another soft-tosser.

Even if Hendricks and Miley are what the Cubs hope in 2022, it’s possible they may not have many good years left- and Miley is only a one-year contract. After those two, the other in-house options are Alec Mills (yet another soft-tosser and coming off a 5.07 ERA season) and promising but unproven — both in terms of results and workload — arms such as Adbert Alzolay, Justin Steele, and Keegan Thompson.

So, the Cubs needed much more talent, certainty, and innings for this rotation in 2022. But the same concerns were there for 2023-plus as well. The addition of Stroman goes a long, long way to improving things on this front, both in the short and long-term. He also allows the Cubs to not have to put as much pressure on the young pitcher to perform immediately- and the Cubs can be more creative with how they use those arms either at the back of the rotation or in the bullpen. Also, if the Cubs want to take a chance on an upside arm via free agency or trade that may have some red flags, having Stroman allows them to pursue such an opportunity much more freely.

And on the topic of the Cubs making more additions- they likely don’t make this splash for a 30-year-old star pitcher if they don’t have intentions to compete sooner than later- especially since it’s only a three-year deal. Additionally, while money is surely a huge factor here for a player trying to cash in on the most important contract of their life, Stroman likely doesn’t sign with the Cubs to be part of a full-on rebuild. Again, this is a big-time competitor, and he’s still searching for his first ring.

Stroman, on whether he got any clarity from the #Cubs on their competitive plans/timeline:

"I mean, I think them going out and getting me kind of speaks to that point. I think they're definitely not in a full rebuild. They definitely want to win now."

It appeared that the Cubs made be in clear rebuild mode for at least one more year before this move, but now we should assume that they will be aggressive to at least put a decent product on the field in 2022, and progress toward being a legitimate contender in 2023. They’ll likely add at least one more starting pitcher, and they shouldn’t be counted out of the pursuit for Carlos Correa or Trevor Story- they could use an upgrade at shortstop defensively (it would currently be Nico Hoerner, who’s a fringe shortstop and elite defensive second baseman), especially if you want to maximize the groundball skills of Stroman, Miley, Hendricks, and Mills. And we now have reason to believe that the Cubs are willing to spend big dollars to improve the team.

In one move, the Cubs made a big upgrade to their current roster- and to the entire competitive timeline and outlook of the organization.