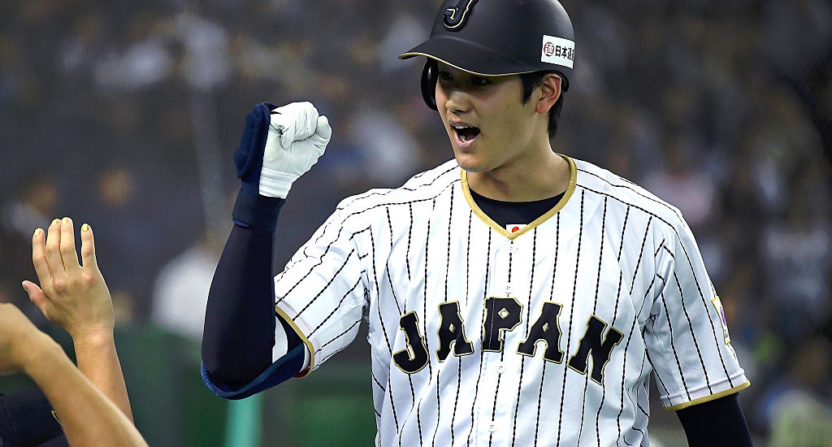 The Shohei Ohtani sweepstakes are fully upon us, with the Japanese hitting-pitching sensation narrowing his list to seven teams, who now find themselves part of a desperate courtship.

And although money is clearly not Ohtani’s chief concern in choosing a team, a little extra cash probably can’t hurt. So with that (presumably) in mind, a pair of Ohtani suitors acquired some international slot money Wednesday, thereby increasing what they can pay the potential ace.

First, the Mariners sent 21-year-old catching prospect David Banuelos to the Twins for $1 million in international slot money. Then the Angels followed suit, dealing 19-year-old outfielder Jacob Pearson to Minnesota for another $1 million.

With those moves, Seattle and L.A. move to within spitting distance of what the Texas Rangers can offer Ohtani.

The moves demonstrate just how all-in on Ohtani these teams are. The Mariners and Angels didn’t just toss away spare parts. They gave away real assets. Banuelos was a fifth-round pick last summer and ranked as the No. 10 prospect in Seattle’s system, per MLB.com. Pearson was L.A.’s third-round pick in the most recent draft and received a $1 million signing bonus, suggesting the team had high hopes for him. He was the Angels’ No. 5 prospect, per MLB.com.

This aggression on the part of these two franchises also suggests that even if money was not a huge factor in Ohtani narrowing down his list, it matters now. After all, the Mariners and Angels would not have given up real prospects if they didn’t think the extra cash would truly increase their odds of signing Ohtani. (Meanwhile, props to the Twins for using this frenzy to strengthen their farm system).

Ohtani must pick a team by December 21, but it sure seems as if he’ll decide before then. Given all the surprises throughout this process, we don’t dare anoint a favorite, but the Mariners and Angels seem to be doing all they can to tilt things their way.