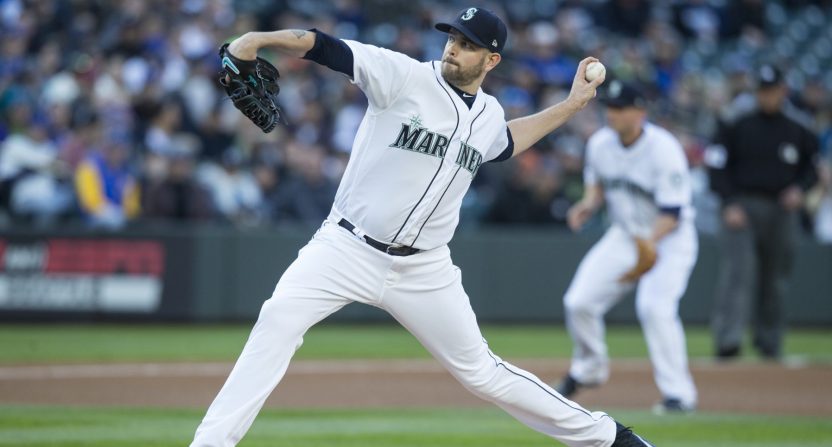 But sometimes, buried in the statistical noise, can lie a nugget of truth. Sometimes that hot start isn’t a Chris-Shelton-like fluke but rather the start of a breakout season. And while we can’t know for sure which players are for real and which are one-month wonders, we can examine the statistics closely to get some clues.

That brings us to James Paxton, the Mariners left-handed pitcher who has yet to allow a run in 21 innings this season, having struck out 22 batters and walked four.

Paxton was a popular breakout pick this spring, thanks to solid production in 2016 (3.79 ERA in 121 innings) that came with even better underlying stats (2.80 FIP, 18.2 K-BB%). After spending three straight years on top-100 prospect lists, he had shown some glimpses of stardom, especially if you looked at the advanced stats.

And so far in 2017, it’s been more of the same for Paxton—only better.  Not only does has the southpaw not allowed a single run this year, his peripheral numbers are excellent. His strikeout rate (which is one of the quickest stats to stabilize) is up from 22.9 percent last year to 29.3 percent this year, which is a big reason why his FIP sits at 1.38, best in the American League.

Paxton has accomplished these results while relying more heavily on his curveball (or knuckle-curve, if you prefer) than ever before. It’s tough to know how much that is about a conscious decision to feature the curve over the cutter or changeup and how much of it is just about matchups, but the results have been great. According to Brooks Baseball, Paxton has thrown 72 curveballs this season and not one of them has resulted in a hit for the opposing team.

That's not even fair, James. pic.twitter.com/hlcxqZqmWG

And it’s not like Paxton has excelled against pushover opponents. Two of his starts have come against Houston, one of the toughest lineups in the league, and the other came against Texas, another dangerous offense.

Obviously Paxton won’t maintain his current numbers forever. It’s not hard to poke some holes in his early-season performance—opposing players are hitting .158 against him on balls in play, which won’t last, and he hasn’t allowed a single home run, which is probably a bit lucky. But based on his career trajectory, his numbers from last season, his peripheral stats this year and the success of his apparent change in approach, Paxton’s outlook looks extremely good.

Paxton will make his fourth start Thursday, facing an Oakland lineup that ranks 21st in baseball in team OPS, a year after ranking 28th in that category. It’s very possible that his scoreless streak lives to see another five days. But no matter what happens against the Athletics, it sure looks like Paxton is here to stay.