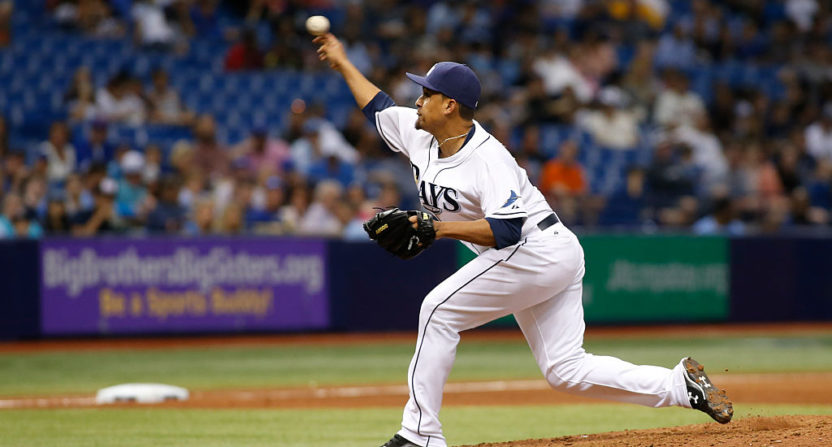 You can’t buy much for a dollar these days, but you can apparently still buy a major league relief pitcher. The Seattle Mariners picked up quite the bargain in a recent deal with the Texas Rangers by obtaining reliever Ernesto Frieri for $1.

That’s less than some people may have paid for a Freieri baseball card on ebay, after calculating shipping and handling…

These people paid more for Ernesto Frieri cards, than the Mariners did for the actual human. (See RT on TL). pic.twitter.com/aXQofeo3ab

The Rangers had signed Frieri to a minor league contract in June. After going 0-1 with a 5.14 ERA in six appearances for the big league club, Frieri was assigned back to triple-A in July, where he rebounded and waited for his next opportunity to play in the majors. While he has not been given that opportunity just yet, the Mariners were itching to add some potential arms to their bullpen. That led them to work out a deal with the Rangers to bring Frieri over to their farm system, and it cost them just a dollar.

These types of transactions are not all that uncommon in baseball, but the headline alone is always fun to read. Teams will often agree to allow a veteran in the minors to switch franchises at the low, low cost of 100 pennies if it means they may have a better chance to have an impact elsewhere. With the Mariners in need of bolstering their bullpen in a possible playoff push and the Rangers entering a rebuild after shipping Yu Darvish off to the Dodgers for a handful of players, the exchanging of a veteran in the minors was a case of perfect timing for Frieri.

Seattle moved Frieri to their triple-A team in Tacoma and will likely call him up to the Mariners in the second half of the season if things continue to go well.

So the Mariners purchased relievers Tony Zych and Ernesto Frieri for a total of $2 but I can't get Subway cookies 3/$1 anymore. Shit.

The mariners during the Ernesto Frieri trade pic.twitter.com/elilqVtrlC

So let this be a lesson to you all that saving up your spare change can come in handy. It might just be able to buy you a veteran reliever some day.