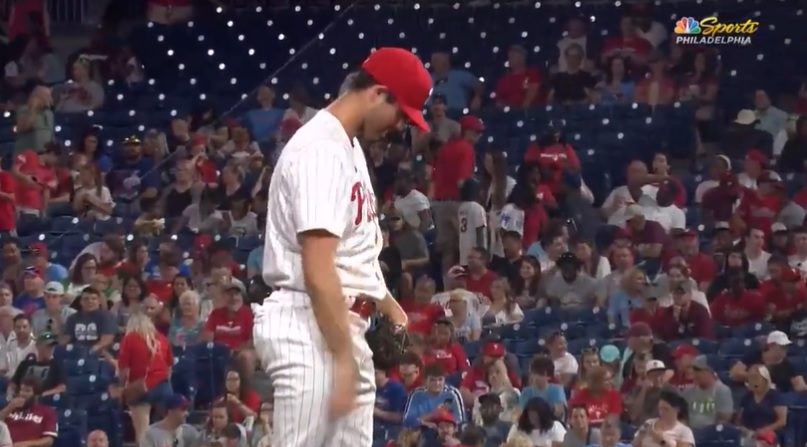 Perhaps the longest and bumpiest journey that any No. 1 pick has ever had to Major League Baseball was completed on Wednesday when Mark Appel pitched for the Philadelphia Phillies against the Atlanta Braves.

Appel was drafted first overall in 2013 by the Houston Astros. He was traded to the Phillies in 2015, struggled with both ineffectiveness and injuries, and in 2018, stepped away from the game. But prior to the 2021 season, Appel returned. In 2022, he posted a 1.93 ERA, 0.929 WHIP, and struck out 24 hitters over 28 innings in 19 appearances for the Triple-A Lehigh Valley IronPigs before being called up by the Phillies.

In the ninth inning of Wednesday’s game against Atlanta, Philadelphia’s bullpen door opened and Appel walked out to the mound to make his major-league debut.

Appel didn’t waste any time getting to work. The first pitch of his big league career was to Marcell Ozuna, who lined out to Rhys Hoskins.

That certainly could have been a hit. But after everything he dealt with, Appel was probably owed some good luck.

Appel then surrendered a hit to William Contreras but settled down from there. He recorded his first major-league strikeout against Adam Duvall, then retired Phil Gosselin on a fielder’s choice to get out of the inning. He allowed just one baserunner in a scoreless inning of work.

But regardless of how well he pitched, Appel’s debut was always going to be a big story. Baseball fans everywhere were thrilled to see him finally make it to the majors.

W O W
It finally happened. Good for him. https://t.co/4CNFRxGzfL

Good for Mark Appel man. He’s been through it all. https://t.co/O0J5gXdthE

You have to feel good for Mark Appel.

Congratulations to #Phillies reliever Mark Appel, who made his #MLB debut tonight, and gets a rousing ovation from the Phillies' fans after a scoreless ninth inning against Atlanta. #Perseverance

If nothing else, Appel finally making the majors is a good lesson in perseverance paying off. Also, something not working out as planned doesn’t mean that it won’t work out.