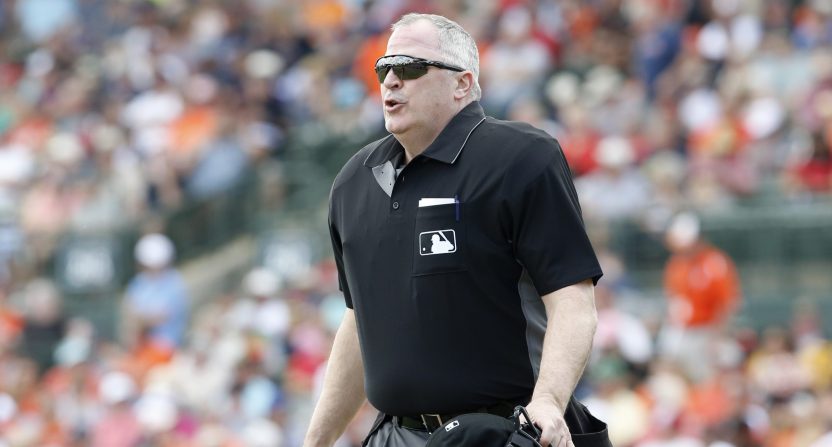 If you believe that Major League Baseball should use robot umpires instead of humans, the best argument in your favor could well have happened in Saturday’s game between the Milwaukee Brewers and Miami Marlins.

Before Milwaukee pitcher Trevor Gott delivered what appeared to be a 3-2 pitch to Miami’s Jesus Sanchez, the game was halted. Brewers manager Craig Counsell and home plate umpire Bill Welke were in an argument, of sorts. Only, it wasn’t that heated. Counsell believed the count should be 2-2. Welke conferenced with the three other umpires, which proved fruitless. He then called for an official video review. At that point, the replay officials in New York were called.

After a delay of more than four minutes, the word came in. Counsell was correct. The count was 2-2.

If you’re baffled as to how it took so long to get something as simple as the count correct, you’re not alone. Many MLB fans shared that sentiment — and the call for robot umpires was popular.

The umpires in Miami all forgot what the count was, so they had to get on the phone with MLB in New York and took over four minutes to figure it out pic.twitter.com/Vn4dfBIllo

You know what wouldn't forget the count? A computer. 🤖 @MLB @MLBUA https://t.co/Xk6USdiidb

The umps are making themselves look like fools all across the league this season 🙄 https://t.co/ruU4F1toSf

Omg they may actually be worse than NFL refs. https://t.co/5X0AfEKPW3

All the technology in the world and they don’t carry a balls and strikes indicator that you can buy on Amazon for five bucks https://t.co/Tc78vzdSXH

This has not been a great season for the umpires so far. But putting ourselves in their shoes, it’s easy to see how some of the worst mistakes have been made.

Yes, MLB fans lived vicariously through Kyle Schwarber as he blew a gasket arguing a Strike 3 call made by Angel Hernandez. But that was a 98-mile-per-hour pitch with movement and was just off of the strike zone. Marcell Ozuna struck out on three pitches out of the strike zone. But again, we’re talking about pitches at high speed with movement. Sure, Madison Bumgarner was baited into arguing, prompting an ejection. But he willingly took the bait. And at least that umpire acknowledged his mistakes.

But losing track of the count? That’s not a fast-moving pitch, nor is it a play at a base with several moving parts. It’s not an adrenaline situation like Bumgarner’s incident might have been. As an umpire, you have several seconds between pitches. There’s no excuse for losing track of the count and certainly no excuse for four umpires not knowing what the right count is.

Losing the COUNT as an ump, at the highest level of the sport no less, is the equivalent of a truck driver forgetting how to drive a truck or a teacher forgetting how to read… HP ump gets 90% of the blame here but… really, the other 3 umps had no clue either?!?💀 #RoboUmpsNow https://t.co/JBbaYQ8Rnm

To be clear, this is not an epidemic in baseball. An umpire losing track of the count is rare. But when it happens and it takes this long to get corrected, it’s impossible to ignore.

If MLB wants to improve the pace of games, this can’t happen. The umpires can’t let it happen — not unless they want robots to be calling games.

[Welcome to the Ump Show]