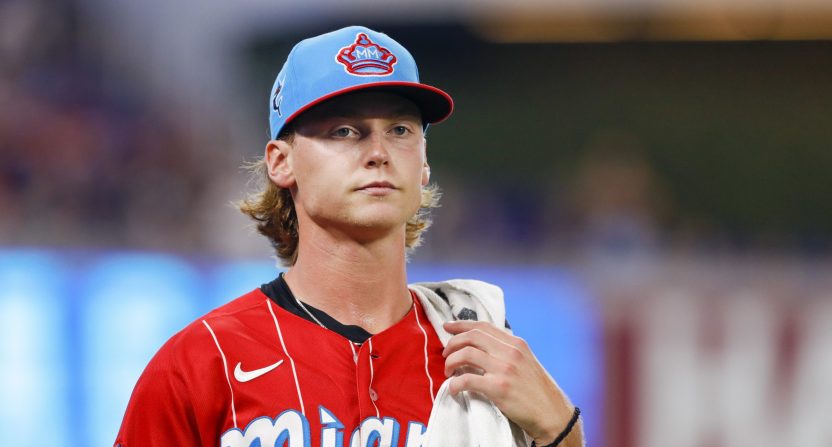 While pitcher Max Meyer is a franchise cornerstone, it will be a long time before the No. 3 pick from the 2020 MLB Draft takes the mound for the Miami Marlins again. In his second MLB start, Meyer lasted only two-thirds of an inning, throwing just 10 pitches before leaving with an injury. On Thursday, the severity of the injury was revealed, and it’s not good.

#Marlins Max Meyer's MRI on Monday revealed a tear in his UCL.

After the news broke, the MLB world sent its best wishes to the 23-year-old rookie.

Feel horrible for Meyer. I am glad that the Woodbury native and former #Gophers pitcher a) made his MLB debut, b) can now collect MLB $$. https://t.co/LkirpanXx1

There are two ways of looking at this news.

One is obvious, that it’s a terrible break. Tommy John surgery will end his 2022 season. While it’s possible that Meyer could be back at the end of the 2023 season, the most likely scenario is that he won’t return to an MLB mound until spring training in 2024.

That’s bad news for all parties involved. Meyer has only thrown six innings in his MLB career but the stuff he’s showcased has been dazzling.

But while the bad news is obvious, there’s some good news to take from this, as well. Pitchers have a high success rate of coming back from Tommy John surgery and pitching well.

In 2018, Shohei Ohtani underwent Tommy John surgery. He’s pitched remarkably well since coming back. More recently, Justin Verlander had Tommy John surgery. Despite that — and that he’s 39 — Verlander is now arguably pitching better than he has at any point of his career, which was already on a Hall of Fame track. And those are just two examples on a vast list of pitchers to bounce back from Tommy John surgery.

Meyer being sidelined is certainly not good news. Still, there’s every reason to believe that he’ll be back in top form when he does return to the mound.