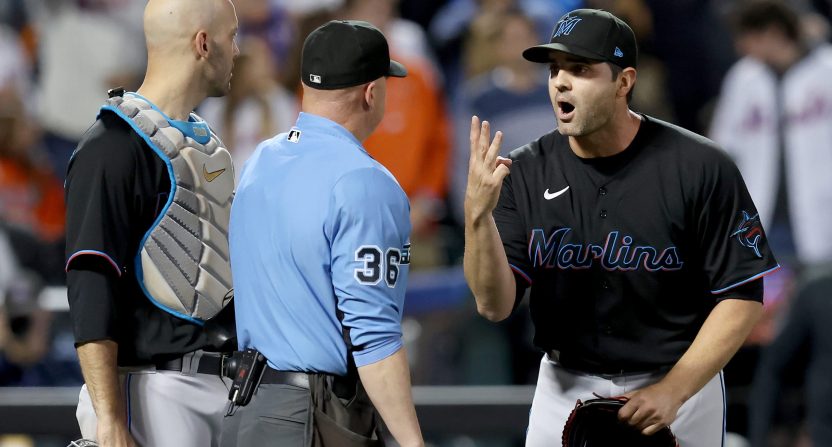 One of the most bizarre innings of the 2022 Major League Baseball season took place during Tuesday night’s game between the Miami Marlins and New York Mets at Citi Field.

In the bottom of the eighth inning, Marlins relief pitcher Richard Bleier was called for three balks by first-base umpire John Tumpane, all during the same Pete Alonso plate appearance. The third balk walked in a run.

Richard Bleier gets called on a balk three times in a single at-bat.

Marlins manager Don Mattingly came out to argue the call and was ejected. Bleier was also ejected after the inning ended.

Mets play-by-play man Gary Cohen of SNY couldn’t believe Bleier was called for the three balks: “I have never seen anything like that in my life!”

Marlins pitcher Richard Bleier was called for three balks in the same at-bat.

"I have never seen anything like that in my life!"- Mets play-by-play man Gary Cohen https://t.co/lZ8Gvhm8wn

Bleier had zero balks in his career over 303 appearances before the Alonso at-bat.

The left-hander is the first pitcher to have three balks in a game since Mike Pelfrey had three in 2009. And he’s the first to have a three-balk inning since Jim Gott in 1988.

Bleier is the first pitcher with a 3-balk inning since Jim Gott on August 6, 1988.

Were these balk calls correct, or did we have yet another ump show on our hands?

There were zero real balks in this video. Imagine if this was the postseason. So stupid https://t.co/cgSqgsmBQF

Watching the replays I am baffled.

Three balks in a single inning for Richard Bleier who is doing the same exact thing mechanically that he has done for seven years out of the stretch.

Here’s video. If this is a balk literally every reliever in baseball balks multiple times per inning pic.twitter.com/uXQA343x4x

What's really weird about the Bleier balking thing is that he's already got nearly 300 big league innings behind him. Umps as a collective decided he wasn't breaking the rules. It's too late to just go rogue as a single ump and call him on what hasn't been a balk for him!

Richard Bleier three balks in one at bat! Who even knows what a balk is?

ah you see kids a balk is

Note out of the Marlins clubhouse: Richard Bleier is believed to be the first Jewish player to be called for 3 balks in one inning on Rosh Hashanah

Despite being called for three balks in one plate appearance, the Marlins came away with a 6-4 win over the Mets. And the Mets fall into a first-place tie with the Atlanta Braves in the NL East.