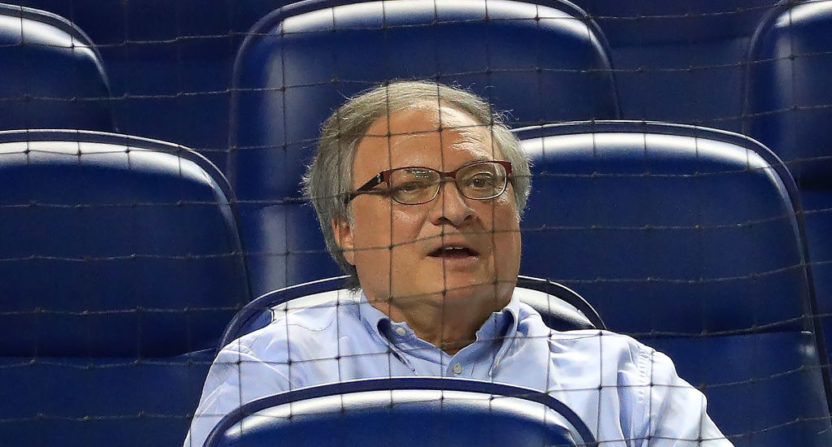 The Miami Marlins are serving as the gracious hosts for Major League Baseball world this week with the All-Star Game in town, but there is not enough polish in the world capable of shining up the turd of a sports owner that is Jeffrey Loria. Not content to milk the city of Miami dry to build an awful eyesore of a baseball stadium, Loria is once again taking up a legal squabble with a Marlins’ fan over property.

The Marlins are reportedly suing Kenneth Sack of Broward County over $725,000 worth of property in an ongoing issue that has also seen multiple season ticket holders and luxury suite owners sued since 2003. Sack had previously battled the Marlins over the cost of a season ticket holder agreement after walking away from his tickets on the belief the Marlins did not live up to their end of the bargain as a franchise.

The Marlins sued Sack to recoup the ticket expenses, which is so ridiculous that it could only happen with the Marlins. Sack appealed, and the drawing out of the legal issue has led the Marlins to seek property owned by Sack.

In January, the team won a judgment against Sack for the full $97,200, but his attorney appealed because the lawyer had missed key hearings and filings after suffering a heart attack and spending months in the hospital. That civil case remains open.

But in the meantime, the team has used that judgment to try to nab a building owned by Sack. On March 12, the Marlins initiated a foreclosure proceeding for a commercial building Sack owns in Oakland Park, arguing that they can seize the property to fulfill the $97,200 he owes them; they ask the judge to appoint a receiver so they can begin collecting rent from the location. (Oddly, county property appraisers say the building at 5090 N. Dixie Hwy. is actually worth $725,000.)

We have seen baseball teams take up legal issues with surrounding property owners before, like the Chicago Cubs challenging property owners setting up seats to watch Cubs games on the rooftops outside Wrigley Field. But this is a different breed of pettiness seen in professional sports. Why Major League Baseball fails time and time again to change the tune around the Marlins is astounding, as they have coddled Loria on multiple occasions.

“I don’t understand why Major League Baseball continues to allow Jeffrey Loria to behave like this,” says Daniel Rose, an attorney representing another former season ticketholder locked in a legal battle with the team. “At the end of the day, what is the motive to go after fans like this? It just shows their greed and a complete lack of respect for their fan base.”

Loria continues to be the worst baseball has to offer, and they rewarded him with an All-Star Game as he is actively working to sell the team. Great job, Major League Baseball.