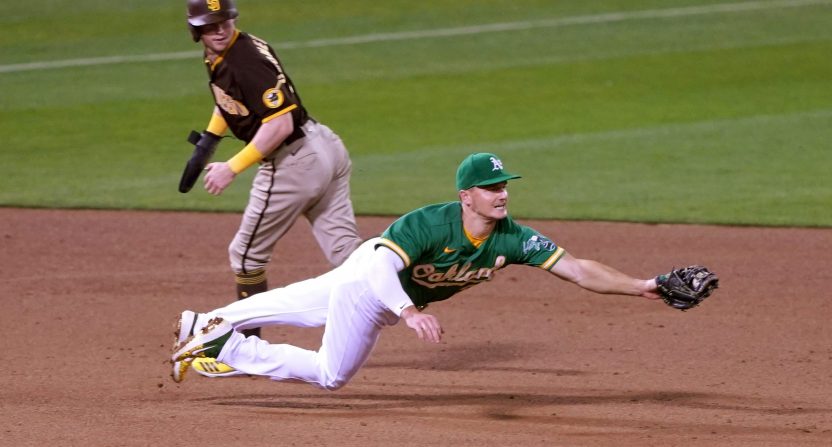 The Oakland Athletics announced on Saturday that star third baseman Matt Chapman will undergo hip surgery and is done for the 2020 season.

The A's announce they’ve placed 3B Matt Chapman on the 10-day injured list. Chapman will undergo surgery on Monday. He’s out for the season.

Oakland has played terrific baseball this season, leading the American League with a 28-15 record. They’re going to win the AL West barring a miraculous comeback by the Houston Astros (FanGraphs gives that a 0.3% chance of happening), who are seven games back with two weeks remaining in the regular season.

The A’s are quite likely to be one of the top-three seeds in the AL, and their chances to represent the AL in the World Series have seemed as good as anybody’s. However, having to play without Chapman will make the road to the World Series much more difficult.

Chapman is Oakland’s best player and one of the best players in all of baseball. The third baseman leads Oakland in WAR (1.3) — despite not playing since Sept. 6 — according to FanGraphs, and was worth a whopping 8.3 WAR in each of 2018 and 2019 according to Baseball Reference. He’s a very good hitter (currently has an .811 OPS in 2020, to go with a career OPS of .839), but he also makes the A’s pitching staff look much better with his remarkable defense. In 2019, he led all of major leaguers — not just third basemen — by being credited with a ridiculous 34 defensive runs saved.

Unlike the National League with the Los Angeles Dodgers, there isn’t a clear juggernaut on the AL side of things, especially with the New York Yankees — the favorite entering this 60-game season — dealing with key injuries themselves. Additionally, this year’s postseason may be more crapshooty than ever, with eight teams making it from each league, and three-game series in the first round that are sure to feature some upsets.

So, the A’s still are very much in the title conversation, but it may take some more fortune than otherwise needed, as well as other players stepping up.