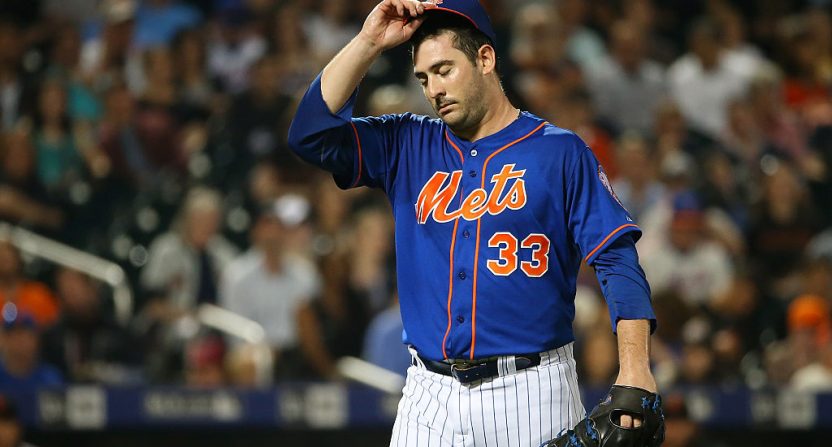 Fans stepped off the subway on Sunday morning and strolled into Citi Field expecting to see the Dark Knight on the mound. Shortly after, and to their dismay, they learned a minor league journeyman replaced him.

While we all agree it’s something serious, at this point, all we have is speculation. Besides whispers that he just didn’t show up to the ballpark on Saturday, no one knows what Harvey did. But let’s look past that and talk about the more important issue. What does this suspension, the cherry on top of a pugnacious resume, mean for Harvey’s career going forward?

“We’ll keep it in-house, the way it’s supposed to be,” Terry Collins says of Matt Harvey’s suspension. The Mets will not reveal details.

Harvey’s contract with the Mets ends in the fall of 2018, when he’ll become a free agent. He has less than two years left to show the Mets what kind of athlete he wants to be. Harvey underwent Tommy John surgery at the end of the 2013 season and, after a year in recovery, seemed to bounce back gracefully. In 2015, he earned the National League Comeback Player of the Year award after posting a 2.71 ERA in 29 starts.

Then, Harvey dealt his worst career FIP (3.51) and worst career ERA (4.86) with a whopping 4-10 record in just 17 starts during 2016. There were obvious signs of erratic weight gain. Batters hit .302 against him, taking advantage of the ghost of Matt Harvey.

Mets general manager Sandy Alderson’s decision to call up minor leaguer Adam Wilk prior to Harvey’s start on Sunday is telling. It’s a timeout for a boy who’s shown lack of physical strength and conditioning time and time again. It’s a sayonara to a once-great athlete, a reality check to a mediocre pitcher. It means the Mets are ready to write Harvey off.

The ounce of hope the Mets had for Harvey is now dissipating. They realize the 2013 Harvey, who posted a 2.27 ERA with 191 strikeouts to end an incredible season, is lost. They’re ready to move on. And in the fall of 2018… exactly which franchise is bursting out of their seats, impatient to pick him up? If Harvey continues pitching the way he has, both pre and post surgery, his options look bleak at best.

Sources: Harvey did not show at ballpark yesterday.

At 28 years old, Harvey still has time to revamp. If he so chooses, Harvey is completely capable of earning trust back from both his fans and his teammates, erasing his reputation and grinding it out. But after the Tommy John injury and a surgery on thoracic outlet syndrome, he may not have it in him to push through. Harvey’s inching closer to a short-lived baseball career.

After the shock subsided, were those Sunday afternoon ticket holders distraught over Harvey’s absence? Or did they just shrug and wonder, “What’s next?” The truth is, Harvey is a light that’s dimming. No one seems to notice him anymore. The buzz that surfaced when he walked into the clubhouse is no longer apparent. Fans and baseball enthusiasts alike are on the precipice of  writing him off. But if he does come back, if he looks at this suspension as a defining moment, it’ll be a surprise we’d be eager to see.