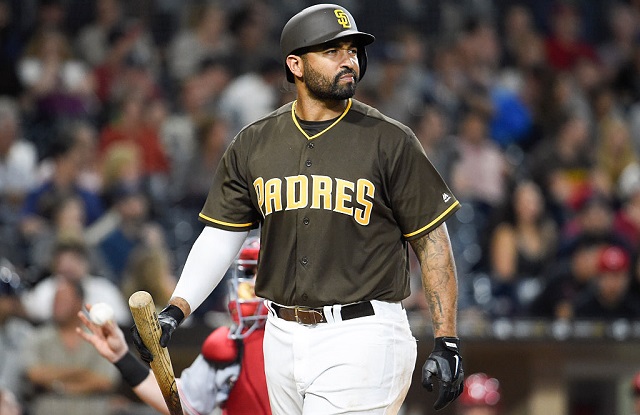 Matt Kemp has had a long, roller coaster-type career. The outfielder started his career in Los Angeles falling short of an MVP all while dating Rihanna.

After the Dodgers were done with him, they shipped him to San Diego where Kemp was one of many big-name players acquired by Padres general manager A.J. Preller within the last two years. Kemp was going to be a key component of what Padres fans hoped would be a resurgence, leading to the first San Diego team to win the World Series.

However, just as he was one of many big names acquired by the Padres in the last two years, Kemp was also one of many current or former star players traded away as San Diego struggled to contend for the postseason.

After Kemp was traded before the recent MLB trade deadline in a salary dump acquisition, Kemp took to The Players Tribune to talk about his time in LA and San Diego along with his future in Atlanta.

“I am truly sorry that I wasn’t able to accomplish my main goal as a Padre — to help bring the city its first World Series title. But I genuinely loved playing in San Diego, and I will always have fond memories of those experiences,” Kemp wrote.

Despite the majority of the piece being about Kemp’s time growing up as a Braves fan and how excited he is to play for Atlanta, Padres’ owner Ron Fowler thought the letter was B.S.

The San Diego Union-Tribune recently wrote about a town hall meeting Fowler had with 350 Padres season-ticket holders. The event occurred on Wednesday, Aug. 3 — two days after Kemp’s piece was published — and Fowler spoke at length about Kemp and another star player which San Diego traded, James Shields.

Here are the quotes listed by the AJC from Fowler and boy, are they brutal and direct:

“I’ll be damned if we’re going to pay high-priced talent to sit on their butts and not perform.”

“We made a conscious decision to ship them out because we want people that are prepared to improve. If you’re making a lot of money and you think you’re already there, you’re not going to get better. … They had a bad attitude. You saw Kemp’s letter. Talk about a bunch of b.s.”

Once again, most of the sentiment behind these quotes is based on Kemp only devoting one paragraph to his time in San Diego and Padres fans his Players Tribune piece.

To rid themselves of Kemp, San Diego took on troublesome third baseman Hector Olivera and the $28.5 million left on his contract, while chippin in $10.5 million of the $64.5 million left owed to Kemp. However, the Padres immediately designated Olivera for assignment, thus showing that all team management really wanted was to get Kemp out of town and save some money.