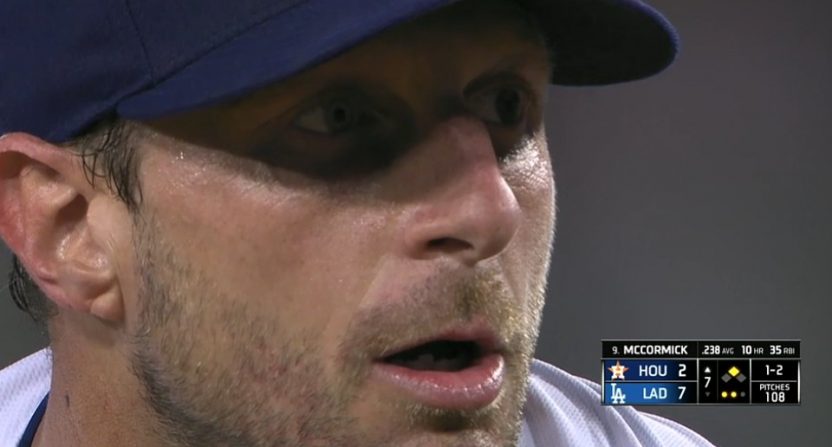 The Los Angeles Dodgers shocked the baseball world with a mega blockbuster trade ahead of last week’s trade deadline, acquiring superstars Max Scherzer and Trea Turner from the Washington Nationals. The defending champion Dodgers were already World Series favorites to begin with, and they already had enough starting pitching, but they upgraded the rotation significantly with the addition of three-time Cy Young winner Max Scherzer.

The right-hander made his Dodgers debut against the Houston Astros on Wednesday night, and showed why Los Angeles went all-out to get him.

Scherzer went seven strong innings against the Astros, allowing two earned runs over seven innings, with 10 strikeouts and one walk. He allowed a home run to Michael Brantley with one out in the top of the first inning, but was on cruise control after that. Astros star Jose Altuve struck out in all three plate appearances vs Scherzer. And Chas McCormick whiffed on a 96 mph from Scherzer to end the seventh before Scherzer walked off the field to a roaring Dodger Stadum crowd.

Here are all 10 Astros that Max Scherzer struck out during his Dodgers debut. pic.twitter.com/O8dIEuVyvb

Scherzer is still a legitimate ace at the age of 37 as he showed on Wednesday night. He now has a 2.75 ERA in 118 innings pitched this season.

Houston made it interesting with two runs in the ninth against Dodgers closer Kenley Jansen, but Los Angeles ultimately held on to win 7-5, putting a “W” next to Scherzer’s name in the box score.