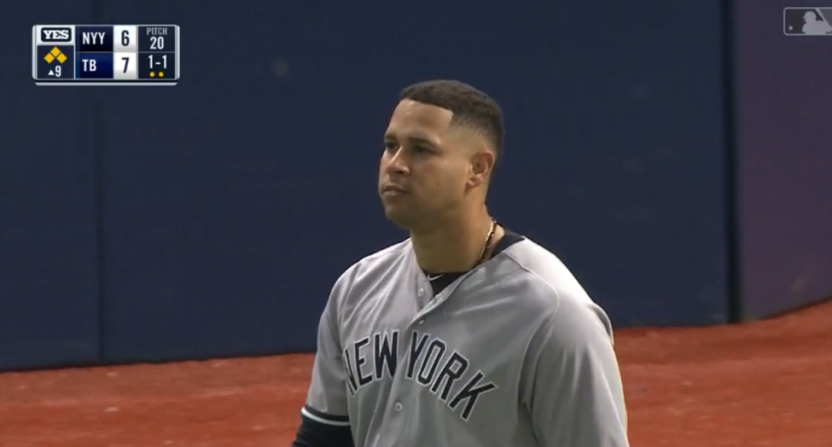 New York Yankees’ catcher Gary Sanchez is at the center of the hustle debate heard around the world. On Monday night, a couple of plays where Sanchez didn’t run as fast as he’s seemingly capable of hurt the Yankees in a 7-6 loss to the Tampa Bay Rays. First. Sanchez’s slow pursuit of a first-inning passed ball let Jake Bauers score from second, and later, his languid movement on a grounder to shifted second baseman Daniel Robertson led to the final out (Robertson threw to shortstop Willy Adames for the force at second, but not in time, but Adames was then able to throw to first in time to beat Sanchez).

That led to a whole lot of media outrage Monday night and Tuesday morning about Sanchez not hustling, but reports Tuesday afternoon indicated Sanchez may have actually reaggravated a groin injury on that passed ball, perhaps helping to explain his slow running in both instances. However, some media members are still blasting Sanchez, and saying that this is a convenient smoke screen by the team. First, here are the plays in question, starting with the passed ball:

And the final out:

That last play in particular led to a whole lot of takes.

On behalf of all Little League coaches, thank you Gary Sanchez. You made our job VERY easy tonight to teach kids what happens when you don't hustle (twice). Man, I'd be chapped if I was a #yankees fan with that lack of effort (twice).

If Gary Sanchez can squat nine innings, he can sprint to first base.

Wow, Gary Sanchez, that was an embarrassment. Terrible. #yankees

I’ve long believed Gary Sanchez wanted to improve and truly become an elite player but there is no defense for last night. At least he knew not to try to defend it in postgame comments.

Sanchez needs to figure out how to walk into a clubhouse with teammates that want to win.

And there were even whole columns blasting Sanchez’s effort here, like this “Lollygagging Gary Sanchez has used up his second chances” one from Ken Davidoff of The New York Post:

A self-help best-seller by Gary Sanchez, coming soon to a Kindle near you:

“How To Offend Your Defenders.”

…Monday’s mishaps weren’t just about Sanchez’s bad hands or legs, though. They spoke to a clear and present lack of effort that we all saw.

Just as we talk about Lyndon B. Johnson losing Walter Cronkite’s support for the Vietnam War as a turning point, Sanchez lost the statheads Monday.

Yeah, a player not running hard to first is totally comparable to the Vietnam War. (And it wouldn’t actually lose many “statheads,” as statistical analysis tends to value a player’s overall contributions versus their effort on any given play, especially on one like this where effort only actually mattered because of an improbable outcome.) It should also be noted that this was only Sanchez’s second game back in the lineup after he missed three weeks with a groin injury. And Tuesday saw reports that he’d reaggravated that injury, and also saw the Yankees placing him on the 10-day disabled list:

Guy got killed for his baserunning when it's completely possible he was injured & simply took the heat for not running hard. Maybe the biggest mistake he made was not saying something & coming out of the game. https://t.co/Z67wbIgxwM

Prior to tonight’s game, the Yankees placed C Gary Sánchez on the 10-day DL with a right groin strain.

It’s also notable that Sanchez didn’t offer excuses here, saying things like “I should have gotten to that ball quicker. I should have done a better job. I should have run harder” after the game. But even that willingness to take blame is being used against him, with some media members arguing that shows he isn’t really hurt and this is just a smokescreen. Including WFAN’s Mike Francesa:

Dr. Francesa gets word that Gary Sanchez may have an injury. He's not buying it. After one commercial, Mike breaks in and reports that Sanchez is going on the DL. You can't make it up. 😂 pic.twitter.com/3oCRiCUmJv

Clearly Yankees believe large chunk of fan base are sheep and will eat up anything they say, nice Gary Sanchez diversion by putting him on DL with phantom injury.

Some fans even criticized Sanchez for speaking through a translator:

Sevy getting angry with gary in the dugout is completely justified. and to top it all off u see him talking to his stupid translator because he refuses to speak english. god i hate gary sanchez' lazy fatass

Does Gary Sanchez really need a translator to know the whole team called him an a-hole and that he should learn to catch?

SO SICK of this shite. Do you ever hear the same thing when Tanaka is speaking? NO. It’s only against Hispanic players. I’m so tired of this crap. Around 25% of MLB players are non-native English speakers and people are hating because they want to express their thoughts well!!! https://t.co/LjvGGMYFx2

How many languages do YOU speak? (I speak 4 by the way!!!) And does it ever occur to you that learning a second language may not come quite as easily to certain people? If you want to understand Gary Sánchez “in his own words” how about you try to learn some Spanish? SO TIRED.

OK, so summarizing this evening: Gary Sánchez is lazy, not only on the field, but also because he doesn’t want to learn English. OK. This is the stupidest thing I have ever heard on Twitter… and I am constantly tweeted at by racists… so that says a lot! Congratulations!

So if a player using a second language and a translator doesn't say he was hurt right away, then he can't be hurt? Got it. Just so you know how Twitter works: If he had said yesterday he were hurt, Sanchez would be getting killed for making excuses.

He apparently has learned the language, but doesn't feel comfortable talking to the media in a second language. I think it is very understandable. https://t.co/kCfRoeXHD1

Here is an idea and this is a self-criticism, as well when I covered: More reporters could learn Spanish.

Even beyond language, though, there are a whole lot of issues to discuss here. For one thing, it seems problematic that the environment of baseball in general and/or the Yankees in particular encourages a player not to report injuries (and to potentially cost both himself and his team by playing hurt). Beyond that, could Sanchez have run faster on these plays? Certainly; he even admitted that after the game. But both of these instances are plays where hustle wouldn’t normally matter that much; running a little faster after a passed ball would help, but not many players are even potentially looking to take two bases there, and a grounder like the one Sanchez hit would result in a game-ending out at second in many cases. So if he was already hurt, it’s understandable why he might not be going all-out on plays that didn’t seem likely to matter.

And a full hustle from Sanchez might not have made a difference here either. If he runs harder after the passed ball or to first base and makes the play look closer, but doesn’t actually change the result, that’s a difference of optics (and a difference in the amount of criticism lobbed his way), but not a difference of outcome. Even if he had managed to beat out the throw at first, that wouldn’t necessarily have given the Yankees a win; it would have tied the game, but they could have lost in extra innings. And even this game’s outcome likely isn’t all that important in the grand scheme of things; yes, the Yankees would like to close the six-game gap on the Red Sox at the top of the AL East and/or solidify their wild-card position, but both elements of that involve more than one game.

While Sanchez is struggling this year, he’s been a key player for New York in the past and is just 25, so he could be a valuable piece for the Yankees for years to come. That seems more important than the outcome of one or two plays in a single game. And it seems more important than publicly questioning if he and the team ares lying about this injury. Of course, there are criticisms to be had here; Sanchez probably either should have run harder or should have told the team that he couldn’t run and let them pull him. But a lot of this seems to be making a mountain out of a molehill, and creating much more drama than the play deserved.