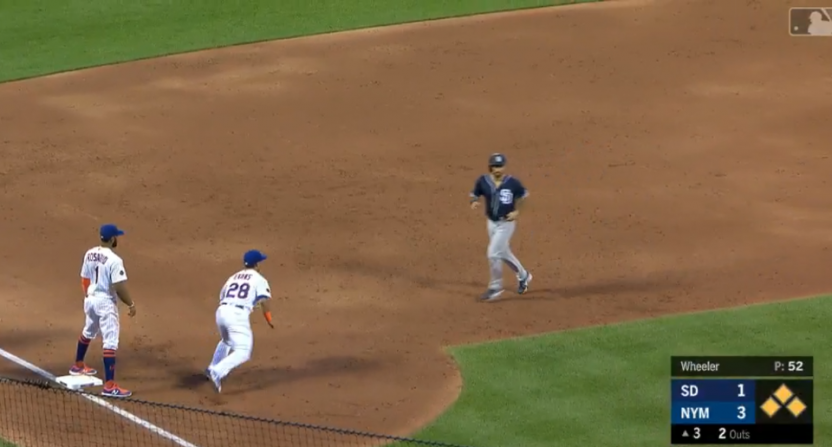 Most of the time this season, it seems like odd things have happened to the Mets, from blown 6-1 leads to successful sacrifice flies to second to star pitchers with hand, foot and mouth disease. On Tuesday, though, an extremely odd situation worked out in their favor.

The Mets were leading the San Diego Padres 3-0 heading into the top of the third, but the Padres managed to load the bases with two outs. Will Myers then hit a single into left field to score Austin Hedges, but Manuel Margot was called out in a close play at the plate. That led to Carlos Asuaje jogging to third, thinking the inning was over. But Mets’ catcher Devin Mesoraco threw to third baseman Phillip Evans anyway, and Evans tagged Asuaje, and third-base umpire Laz Diaz called him out, even though there had already been three outs. The Padres challenged the play at the plate, which was overturned on replay to make the score 3-2, but the inning was then still determined to have ended because Evans’ tag of Asuaje was now the third out. Here’s how it looked:

As per MLB’s statement afterwards, “The runner attempting to advance to third base was unaffected by the incorrect call and was tagged by the fielder.” But understandably, the Padres weren’t happy about that, as MLB.com’s A.J. Cassavell relates:

…”As soon as I saw him call the third out, I started slowing down,” Asuaje said. “I handed [third-base coach Glenn Hoffman] my helmet and I just didn’t think anything of it.”

…”I don’t know how you think he’s making a full-bore effort to advance to third base,” Green said. “I think it’s a lethargic jog toward the third-base coach, which is pretty customary when the third out of an inning is made. You go hand the guy your helmet. That’s effectively what was happening.”

Amazingly, a MLB fourth out (or at least the lack of a fourth out) has been relevant before. One classic case came in a 1989 Yankees-Brewers game, described by Ron Cervanka here:

It occurred on July 1, 1989 when [Bob] Geren was a member of the New York Yankees. The Yankees were playing the Milwaukee Brewers – then of the American League – and were leading by a score of 4-1.

With one out in the bottom of the eighth inning and with Mike Pagliarulo on third base and Geren on first base, Wayne Tolleson attempted a suicide squeeze bunt that was caught in the air by Brewers pitcher Jay Aldrich. Taking his time, Aldrich calmly threw to first base to double up Geren, who had broken for second on contact. But before Geren was doubled off first base, Pagliarulo had crossed home plate. He immediately ran to the dugout to retrieve his glove believing – like everyone else – that the inning was over and that his run had not counted. Because it was a suicide squeeze and like Geren, Pagliarulo had taken off on contact and never tagged up after Aldrich caught the ball, nor did he ever attempt to return to third base to do so.

Lo and behold Pagliarulo’s run did count. How so, you ask? Because the Brewers never appealed that Pagliarulo had left third base early without tagging up, as per MLB’s appeal rule 7.10(a).

“It’s a ‘fourth-out’ situation,” umpire Larry Barnett later explained. “Milwaukee had to throw the ball to third base for what would be the fourth out. Then they can choose to make that one the final out and prevent the run from scoring. But Milwaukee didn’t do that.”

So that one involved a team not getting the fourth out when they could have and should have. In this case, the Mets did the opposite, getting a fourth out that didn’t seem too important at the time, but proved crucial upon review. And hey, at least something finally went their way.