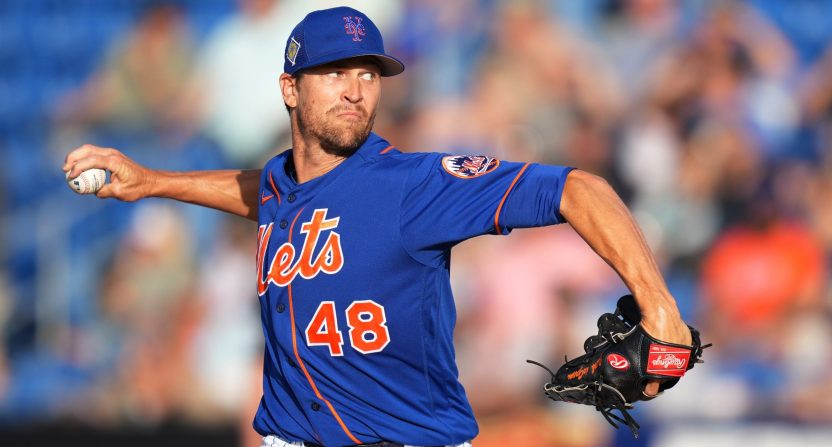 It has been a tough season thus far for New York Mets star pitcher Jacob DeGrom, who has not played for the team so far this season due to a stress fracture in his right scapula.

He has gone through a number of rehab starts recently for Triple-A Syracuse and it appears that there is now an expected date for his first MLB start of the season.

Mets manager Buck Showalter discussed the timeline for his star pitcher to return to the MLB and said that he is “on schedule” to make a start for the Mets at some point next week.

Buck Showalter says Jacob deGrom is "on schedule to make a start next week sometime": pic.twitter.com/NlYIRSEqtG

While Showalter was hesitant to list an exact season debut date for DeGrom, there is some speculation that it could be coming in the Mets’ upcoming series against the Washington Nationals next week.

Fellow star pitcher Max Scherzer is in line to start on Monday for the first game of the series, and it appears that there is a path for DeGrom to start in the second game on Tuesday.

Nothing official yet, but Max Scherzer is lined up to pitch Monday in D.C. if kept on same schedule

This could clear path for Jacob deGrom’s next start Tuesday, which is expected to come in the majors. This would give him an extra day of rest for August 2 the day of the deadline

His last start with Syracuse took place on July 27th, which would give DeGrom six days of rest if he were to start on August 2nd, which would certainly make sense if he is good to go.

In the past, the Mets have fallen apart when DeGrom has gone down with injuries, but that has not been the case this season with the team currently sitting atop the AL East with an impressive 61-37 record.

His addition should only help things as the team makes their push towards the postseason if he can pitch to his potential in the coming months.