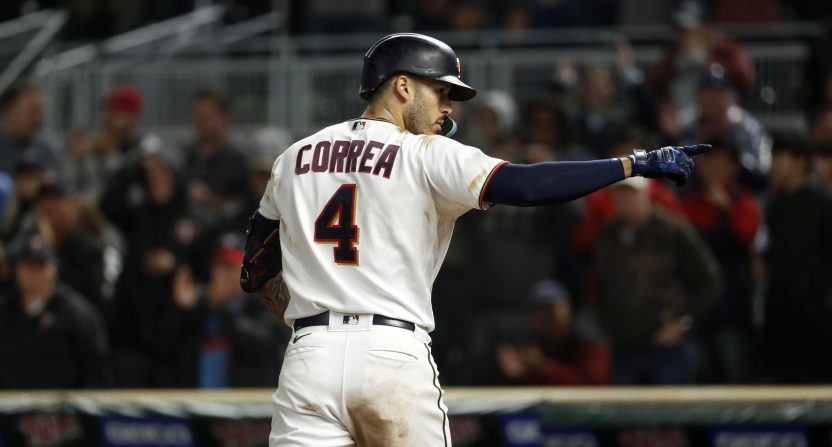 After the New York Mets offered Carlos Correa a $315 million deal in late December, the team had to alleviate possible concerns about the shortstop’s right ankle.

After all, the San Francisco Giants had already backed out of a $350 million agreement with Correa, after a doctor flagged an old ankle injury as problematic. Yet instead of relying on a second opinion from someone else, the Mets reportedly consulted the same specialist, ankle surgeon Dr. Robert Anderson, who had warned the Giants.

Correa shared that surprising news with The Athletic’s Ken Rosenthal.

“The Giants used an ankle specialist who didn’t pass me,” Correa said. “Then the Mets used the same specialist, who obviously wasn’t going to pass me. He had already given an opinion to another team about my ankle. He was not going to change that. He was going to stand by what he was saying, of course, because that is what he believed.’’

The two-time All-Star, who wound up signing a six-year, $200 million contract to return to the Minnesota Twins, notes that the ankle, which was surgically repaired in 2014, has never given him problems.

Although the New York Post reported it is “believed” the Mets consulted other doctors, Correa says specialists he has consulted with don’t believe his ankle is an issue.

“We did have other ankle specialists look at it and say it was going to be fine, orthopedists who know me, even the one who did the surgery on me,’’ Correa told The Athletic. “They were looking at the functionality of the ankle, the way the ankle has been the past eight years. I’ve played at an elite level where my movement has never been compromised.

“The one doctor that had never touched me or seen me or done a test on me, that was the one who said it wasn’t going to be fine.”