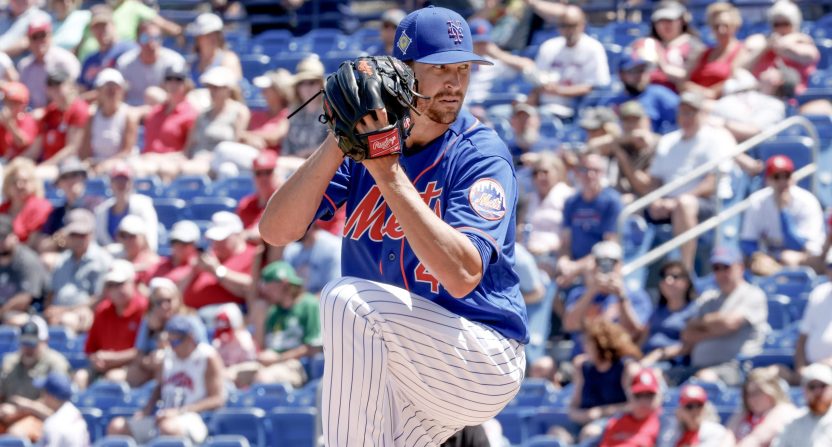 The concern that New York Mets fans had when news broke that Jacob deGrom had tightness in his shoulder was well-founded.

On Friday, the Mets confirmed reports that deGrom will not throw for roughly four weeks.

Jacob deGrom underwent an MRI today that revealed a stress reaction on his scapula that has caused inflammation in the area. The immediate prescription is for Jake to discontinue throwing for up to 4 weeks and then reimage the area. At that time, we’ll update the plan of care.

Mets fans had some time to process this as a possibility after Thursday’s reports. Despite that, they were left devastated by the news.

Just a devastating blow to start the ⚾️ season for deGrom. https://t.co/9sItvAwP4P

Ted Williams said hitting a baseball is the hardest thing to do in sports. I'd argue it's being a #Mets fan. Get well Jacob https://t.co/7mDuOu6Te2

going to need two business days to process this before I can speak about it https://t.co/ojCjEzF06v

It’s ridiculous now. The Mets are cursed. It is so bad it can only happen to this team https://t.co/lYCqhpPfIS

You know, this sucks. https://t.co/OtqVnU6Ije

Why couldn't it have been his left shoulder? https://t.co/QJ3Ti71gDg

Sigh. And so it begins, for long-suffering #Mets fans. https://t.co/34qrNbp4VE

The Mets will begin their season on Thursday, April 7 on the road against the Washington Nationals. deGrom was scheduled to be that day’s starting pitcher, though that is obviously not going to happen now.

Before deGrom’s diagnosis, Mike Puma of the New York Post reported that newly-acquired Met Max Scherzer moving up in the rotation to start on Opening Day was likely.

Scherzer opening the season against one of his former teams caught people’s interest.

And after all this clears up, 3x Cy Young Winner, 2019 World Series Champ, and former #Nationals ace Max Scherzer will face his former club on Opening Day in DC. What a storyline. #MLB #Nats #Mets https://t.co/4loBtN1ppK

So, uh, the framing of this story is a little bit different now.

In all likelihood, Max Scherzer faces the Nationals on Opening Day on April 7. https://t.co/FkIcOGsz0U

So Max Scherzer will start for the Mets against the Nationals on Opening Day at Nationals Park. Cool. This is cool. Seriously. I'm cool with it. pic.twitter.com/iUzDyOcPzE

Mets fans realizing they have Max Scherzer as their ace but knowing Jacob deGrom is out indefinitely pic.twitter.com/o5EakD6x97

As far as consolation prizes go, that’s not bad. But deGrom being out is definitely bad news.