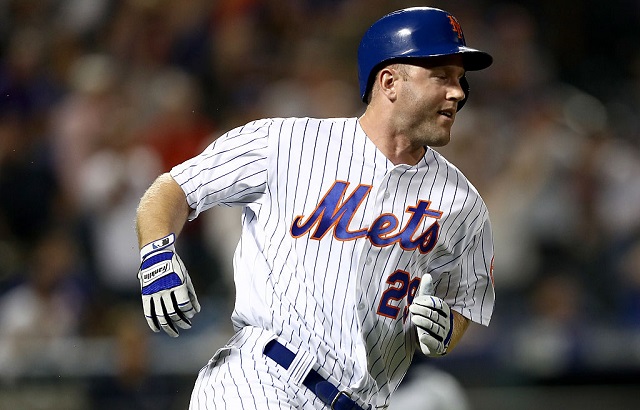 Tuesday night against the Atlanta Braves, the New York Mets trotted out a lineup that would look out of place on some Triple-A fields.

T.J. Rivera, a 27-year-old infielder from the Bronx signed by the Mets in 2011, and who prior to August 10 had never seen a pitch in the major leagues, was batting fifth. Hitting in the seventh spot was James Loney, the well-past-his-prime 32-year-old first baseman who’s slugging a whopping .391 this season. When manager Terry Collins needed a big hit in the eighth inning he called on Eric Campbell, a 29-year-old with a measly 429 career big league at-bats to his name. On the mound for the Mets to start the game: Robert Gsellman, a 23-year-old Jacob deGrom lookalike who surrendered 31 earned runs in 48 Triple-A innings before joining the Mets in August.

The Mets wound up losing to the Braves, 5-4, their second-consecutive loss in two nights. Yet thanks to a six-game winning streak in early September and an 11-7 overall record for the month they’re still, at 80-71, locked in a three-way tie with the Cardinals and Giants for the National League’s two Wild Card playoff spots. A light schedule to end the season also has the Mets pegged by Baseball-Reference as heavy favorites (71.6 percent) to host the National Wild Card Game.

Of course, if the Mets were healthy, nothing about this would be surprising. Coming into the season their rotation was considered the best in the majors — young, powerful and deep. Noah Syndergaard, Jacob deGrom and Matt Harvey were all proven aces, and Steven Matz seemed liked he could soon morph into one. If someone went down, Zack Wheeler, rehabbing from Tommy John surgery, would be able to join the team soon.

Instead, the Mets are now, in crunch time, relying on anonymous arms like Seth Lugo, Gabriel Ynoa and Robert Gsellman. I could have made up one of those names and you wouldn’t even know. Harvey, deGrom, and Wheeler have made a total of 41 starts and are all out for the year. Matz has missed the past month and might also be out for the season.

Then there was the lineup, considered one of the best and most rounded groups in the National League. That didn’t go as planned, either.

David Wright, Lucas Duda and Juan Lagares, three members of the Mets’ opening day lineup, have contributed a total of 1.3 Wins Above Replacement (per Fangraphs). Starting second baseman Neil Walker, the team’s WAR leader (3.8), underwent season-ending back surgery in September. Jose Reyes, who couldn’t find a major league home until late June, thanks to a spousal abuse arrest and a diminishing skillset, is now leading off. Travis d’Arnaud (.246 average) and Michael Conforto (.217) look like clueless high school hitters. Heralded trade-deadline acquisition Jay Bruce is hitting. 189/.255/.289 in 40 games with the team.

All of which begs the following question: How the hell is this happening? How is a team full of no-name minor-leaguers and unranked prospects outplaying nearly every team in the National League?

There’s no clear answer, but there are a few theories we can float:

1) Terry Collins is a Wizard

This is usually the first place “we” (media members, fans, etc.) go when we can’t explain how a team is outperforming expectations. I don’t get how this is happening, so clearly the coach/manager is clicking all the right buttons. It’s possible that Collins is doing something behind the scenes. But I’m hesitant about labeling him THE reason the Mets are still competing. He is, after all, a baseball manager and baseball managers, as we all know, are fundamentally worthless.

Maybe Collins maintains a good locker room or whatever the cliché is and his players enjoy showing up for work every day. But winning usually triggers the same response, especially when a bunch of journeymen are involved. Collins is, I’d say, an average manager. He makes some boneheaded moves, but not enough to warrant being fired, and his players do seem to like him. Is that enough to carry a team of Triple-A talent to the playoffs? I find that hard to believe.

2) Actually, Yoenis Cespedes is the Wizard

This, I can buy. Cespedes, after all, is a beast, a home-run swatting machine whose mere presence seems to lift the Mets. The numbers are great: .284/.354/.543 with 30 home runs, despite playing just 122 games and spending the past month hobbling around with a bad hamstring.

Cespedes is one of the few players who can influence games even when not involved in plays. Pitchers are scared of facing him in late-innings, and for good reason:

Base runners are wary of challenging him, also for good reason:

Cespedes is a marvelous baseball player who seems like a genuine joy to be around. Thing is, he’s still just one player, who, according to Fangraphs, has contributed 3.2 Wins Above Replacement. Cespedes is fantastic, but team success in baseball, by nature of the sport, can never be the result of one player’s excellence.

So, what else you got?

3) The back-end of the bullpen is ridiculously good

Now we’re getting somewhere. In Jeurys Familia and Addison Reed, the Mets have one of the top late-game combinations in the game. Familia is the closer and one of baseball’s best. He’s saved 49 games in 53 chances. More importantly, he has an ERA of 2.43 and is striking out 9.6 batters per nine innings, compared to 3.5 walks.

Since he’s the closer, Familia is the All Star and more famous of the two, but Reed has actually outpitched him this season and emerged as one of the game’s best relief aces. The numbers are otherworldly: 1.73 ERA in 72.2 innings, with 85 strikeouts and just 12 walks. Reed has also surrendered just three home runs all season, despite pounding the strike zone.

We’ve seen before — with last year’s Royals, for example — that strong bullpens can cover up a lot of issues, such as an injury-plagued starting rotation. It’s a good chance that’s what we’re seeing here.

Parsing the Mets’ stats leaves no clear answers. Sure, they’ve hit a ton of home runs (second in the NL), but they also have the league’s third-lowest on-base percentage (.311). You could think that perhaps they’re getting lucky with some of their batted balls — except their batting average on balls in play (.278) is the worst in the NL.

The starters have compiled an impressive 3.55 ERA, also good for second in the NL, but that doesn’t explain how pitchers like Lugo and Gsell-whatever have stifled opposing batters.

Which leaves us where baseball often gloriously does: without clear answers. In baseball, things often happen that make no sense. When this happens, the best thing to do is sit back and enjoy the ride.