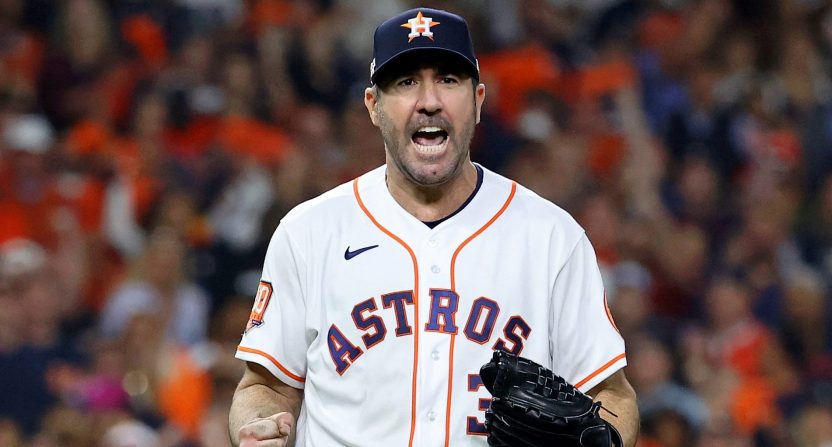 The New York Mets are talking to one of the biggest pitching prizes on the free agent market.

The Athletic’s Ken Rosenthal reported Sunday that the Mets talked with free agent Justin Verlander this week. The ace won his third Cy Young Award this season, winning with a unanimous vote after going 18-4 with a 1.75 ERA for the World Series champion Houston Astros.

The Mets‘ front-line starters, Jacob deGrom, Max Scherzer and Chris Bassitt, supposedly the team’s biggest strength, didn’t perform well in the season’s final days and in the postseason. deGrom and Bassitt are free agents, as is fellow starter Taijuan Walker (12-5 in 2022).

So whether the Mets are looking at the 39-year-old Verlander to replace deGrom, or they’re planning to spend big — really big — to sign both free-agent superstars, remains to be seen.

The Astros are the favorites to retain Verlander. His other top options are believed to include every big market team you see in the hunt for almost every other superstar free agent: the New York Yankees, the Los Angeles Dodgers and the Chicago Cubs.

Baseball fans checking in on Twitter were all over the board on whether the Mets should pursue Verlander.

“It would be peak Mets to sign a 39 year-old power pitcher,” tweeted one fan.

He literally just won a cy young award. Yes he is a “power pitcher” but he doesn’t rely on that. Everything he throws he can command and they all move.

Yeah but have they spoken since the last time they spoke https://t.co/GOnEpZR7Wc

To be honest I’d rather chase DeGrom than JV if it came to dollars.

Yankees cannot let Justin Verlander go to the Mets. Thwart their plan ASAP. However, most importantly, focus on Judge.

Reports confirmed: Justin Verlander spoke with his brother @BenVerlander his wife @KateUpton and several people in a restaurant oh and someone with a @mets jersey said, “JV WE LOVE YOU.” Not sure what it means but it sounds like he will sign with a team on 2023. 🤷🏻‍♂️ https://t.co/AFgWJJ9hIa

"But if deGrom leaves, I'm of the opinion that the Mets need another ace to replace him. And I think it would be an incredibly easy call to target Verlander over Rodón."