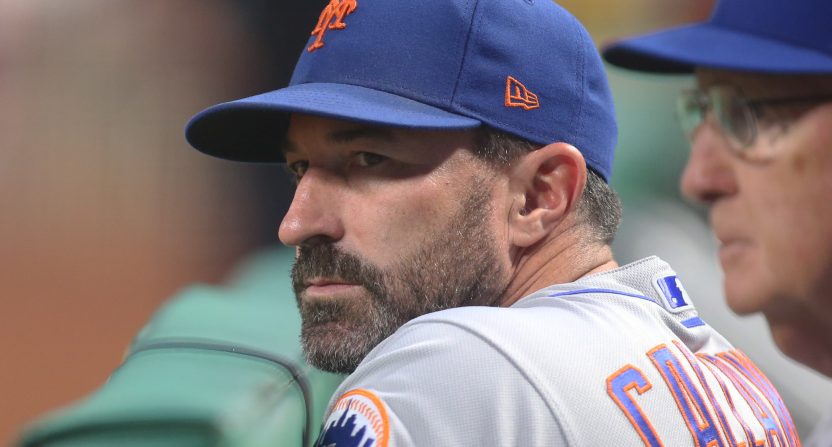 The New York Mets lost 6-4 to the Atlanta Braves on Wednesday night, giving the Mets a three-game losing streak after a remarkable stretch that saw them win 15 of 16 games.

New York took a 2-1 lead into the bottom of the seventh inning, when Mets manager Mickey Callaway chose to pull Matz in favor of reliever Seth Lugo, and Lugo proceeded to allow five earned runs, while recording just one out.

Choosing to replace Matz with Lugo isn’t necessarily a bad decision in itself. Matz has been rather mediocre on the season, with a 4.33 ERA and 4.58 FIP, while Lugo is New York’s best reliever and entered with a 2.65 ERA and 3.08 FIP. But Matz was cruising at 79 pitches with 14 straight batters retired, and Callaway let him bat in the top of the seventh inning. Additionally, this situation was likely asking Lugo to go two innings, with Edwin Diaz — owner of a 5.60 ERA — likely to then get the ninth.

Well, in the postgame, Callaway said he pulled Matz because “the best reliever in baseball” was ready to go out of the bullpen. Callaway added that he would make this move “100 times out of 100.”

Callaway says he removed Matz because he had the “best reliever in baseball” sitting in the bullpen in Lugo and he would make the same move 100 times out of 100.

Steven Matz was not injured. Mickey Callaway made the move to take out Matz at 79 pitches "because we had the best reliever in baseball sitting down there."

Oof. Lugo certainly is a very good reliever, with the ability to go multiple innings effectively (thanks to his past as a starting pitcher).

But the best reliever in baseball? That’s an absolutely laughable suggestion. Even before Lugo’s disastrous performance Wednesday, 15 relievers ranked ahead of him (1.3) in WAR according to FanGraphs, and San Diego Padres reliever Kirby Yates — 1.15 ERA, 1.02 FIP, 33 saves — more than doubled his WAR mark at 2.8.

Of course Callaway is going to talk up his own guy, but this is a pretty desperate attempt to defend a questionable decision, especially when he could’ve just waited until the eighth inning to go Lugo.

Now, it’s  important to keep in mind that Lugo may have just imploded in the eighth inning anyway, and we also don’t know if the Mets would’ve scored two more runs in the ninth inning had the score been different entering it. It’s very possible the Mets still lose, but things probably could’ve been handled better by Callaway- both in-game and postgame.