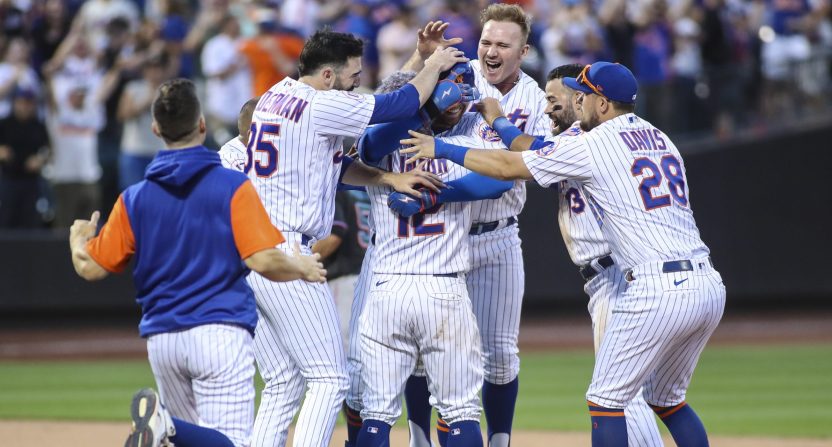 For a while, it looked like the Miami Marlins would be comeback winners over the New York Mets on Saturday. But in three pitches, that changed.

An eighth-inning home run from Jesús Aguilar tied the game for Miami. In the top of the tenth inning, the Marlins went ahead on an error from Francisco Lindor, which allowed Billy Hamilton to score.

Jon Berti singles in the hole and Billy Hamilton's speed forces an error from Fransisco Lindor as Miami takes the 4-3 lead in the 10th!!!@Marlins | #MakeItMiami pic.twitter.com/euz5lUBJhK

But from there, things only got worse for the Marlins. It started with Jon Berti, who was picked off of second base on a throw from catcher Tomas Nido (who we’ll be hearing more from shortly). Berti beat Nido’s throw but went into the base awkwardly and either overshot the base or was shoved off by Lindor. Regardless of where one comes down on that debate, Berti was called out and Miami’s lead was only 4-3.

It seemed like that precarious lead would be good enough for Miami when Tanner Scott retired both Eduardo Escobar and Luis Guillorme to start the inning, leaving courtesy runner Mark Canha stranded at second. Seemingly, Nido was all that stood in the way of a great win for the Marlins. Unfortunately for Miami, its defense also put up a decent roadblock.

Scott did his job against Nido, getting him to hit a ball to third baseman Brian Anderson. But Anderson was going to have a hard time getting Nido and tried to do two things at once. Instead, he did neither. The ball got by him, Canha scored and Nido went into second with a double.

The Marlins got another glimmer of hope when Brandon Nimmo hit a comebacker to Scott. But Scott couldn’t come up with the ball cleanly, rushed his throw to first and threw the ball away. With that, Nido scored the winning run, ending what was a disastrous sequence for Miami.

The Marlins' defense melts down in the bottom of the 10th and the Mets get a wild walk-off victory. ⚾️

Here were the final two plays, with Gary Cohen on the call for SNY: pic.twitter.com/pAtxp87JUE

There was a lot to digest from this frenetic finish. The Marlins own Twitter feed couldn’t even hide its disgust over the team’s breakdown.

no one talk to us rn.

Whoever runs that page was not alone. MLB fans were highly criticial of the defensive collapse.

This is living proof why the Fish are the Fish. https://t.co/QlUi0kDGbF

But of course, we can’t only focus on the losing team. While it was a terrible loss for the Marlins, it was a great win for the Mets, which the MLB world was also quick to talk about.

Was that finish an ode to the '86 Mets or what?

Indeed, that finish was a tribute to the famous game in Mets history — Game 6 of the 1986 World Series — in so many ways.

First of all, Gary Cohen’s call of “here comes Nido and the Mets win it” was superb. That was Vin Scully’s call following Bill Buckner’s error in that game, which allowed Ray Knight to score the winning run. He also made that call with two members of that team — Ron Darling and Keith Hernandez in the booth with him on the same day that the latter had his number retired by the Mets before this crazy game.

That’s not all. That October evening marked the last time the Mets won a game in this situation, until Saturday.

Before today, the last time the Mets won on a walk-off error with 2 outs in extra innings:

Some magic on Keith Hernandez Day.

Amazingly, the comparisons between that play and this sequence continue. While Anderson wasn’t charged with an error on the tying run, he made a mistake on the play. As Darling noted, Anderson needed to catch the ball first. Even if he couldn’t throw Nido out, fielding the ball cleanly would have kept Canha from scoring.

Instead, he lifted up too early, trying to catch the ball while doing something else at the same time. In other words, exactly what Buckner did — albeit from the other side of the diamond.

The difference is that while Anderson’s mistake allowed the tying run to score, that had already happened well before Buckner’s error — a mistake that has long been lost on those trying to blame him for losing that game.

Obviously, the other difference is that this was not the World Series. Still, it was an unforgettable game for several reasons, regardless of which team anyone watching might have been cheering for.