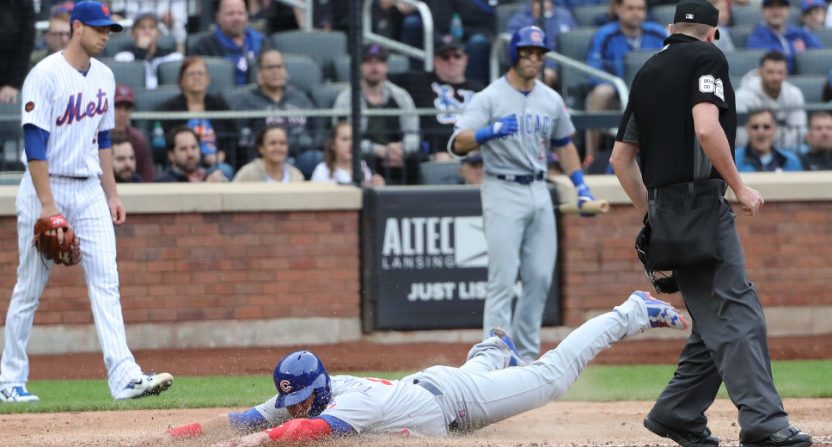 The now 27-30 New York Mets are regularly finding entertaining new ways to be bad, and they showed off a couple of those in a 2-0 loss to the Chicago Cubs Sunday. The game was scoreless heading into the top of the seventh, with starter Steven Matz still in the game for the Mets, and Cubs’ infielder Javier Baez (who made 11 defensive positional changes in this one) started off the inning with a single on a ground ball to center field. Catcher Willson Contreras then singled on a liner to center, sending Baez to third. And Matz then threw over to first to try and hold Contreras on, leading to Baez taking off and stealing home and Contreras taking second as the Mets threw to the plate:

Ian Happ then struck out, but Kyle Schwarber singled on a ground ball to second baseman Luis Guillorme, which led to Contreras taking third. And then Ben Zobrist hit a blooper that Guillorme backpedaled for and awkwardly took himself instead of letting right fielder Jay Bruce catch it. That meant Guillorme wasn’t ready to throw home, so Contreras scored on a sac fly to the second baseman, as seen in the photo at top and the clip below:

If this shit happened in beer league softball id be livid. This is MAJOR LEAGUE BASEBALL! How the fuck do you give up a sac fly on a ball that’s 15 feet out of the infield. So fucking pathetic. Also, nice 0 on the scoreboard #Mets #lgm #cubs #mlb this is a new low. CUNCEL pic.twitter.com/hKcWfZ9SVD

That only went 203 feet, not your usual scoring play. And to add insult to injury, the not-so-fleet-of-foot Schwarber then swiped second:

The Mets just allowed Kyle Schwarber’s seventh career stolen base. This is his 249th career game.

As Adler noted, that’s part of a larger problem with this team:

That’s now 51 stolen bases against the Mets this season. League average coming into today was 29.

And Twitter was unimpressed with the Mets’ overall Metsing:

When was the last time a team scored two runs the way the Cubs the just did….? A steal of home followed by a sac fly to the 2nd baseman…. #Mets

The Mets are an utter embarrassment. Three stolen bases in an inning, including a steal of home… and a SAC fly to the second baseman. What a joke. Team meetings won’t fix this

The Mets are the most embarrassing team in New York, and that’s saying a lot given the other teams that play here.

In memory of Casey Stengel: Can anyone here play this game? Really!

Indeed, this is bringing up memories of the great Jimmy Breslin book with that Stengel quotation as its title, about the woeful expansion Mets back in 1962. 56 years later, it’s still pretty applicable. In fact, Sahadev Sharma of The Athletic Chicago noted that a local cabbie tried to dissuade him from a trip to Citi Field Sunday:

My cab driver has asked me multiple times of I really want to go to Citi Field. "There's a lot to do in New York, you really want to watch to the Mets?"

Even New York’s Sports Pope was not impressed with the overall Metsing on display Sunday:

This is embarrassing baseball by the Mets.

And neither were the children:

I put the Mets game on for literally two minutes and my 16 month old goddaughter immediately broke out screaming and crying.

She is all of us.

If we need further insight into the state of this franchise, the tweets SNY Mets’ analyst Keith Hernandez sent before yesterday’s loss are quite something:

Times are bad right now folks. I don’t have the answers. Now Bruce has back issues. I must confess that I am at the lowest point of my Met tenure. I need this day off to regroup. But I’ll never throw in the towel. Someone, something has to turn this

around. It won’t happen by magic. It has to be done on the field. Have a nice Saturday. Enjoy life. We’re all very lucky to be living in this country of ours. Don’t forget that however dismayed you may feel. Baseball is just a beautiful game that you need to enjoy no matter how

the home team is playing at present. Note the “at present.”

Should we point out that the Mets somehow lost 7-1 in 14 innings last night? And that they weren’t even able to get a promotion right this weekend?

Nah. That would be piling on.