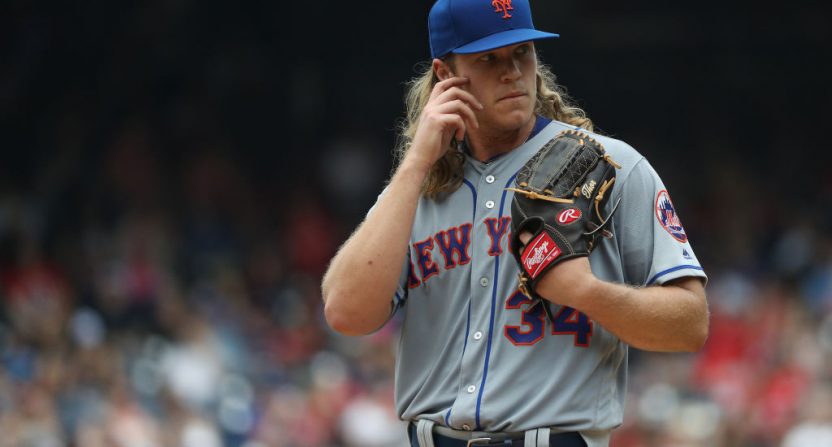 At this point in the season, the New York Mets are more of a comedy of errors than anything, and their latest addition to the disabled list makes for an incredible punchline. Ahead of Sunday evening’s game against the crosstown rival Yankees, the Mets were 40-56, last in the NL East, and they’d seen negative storylines including blown 6-1 leads, the Matt Harvey trade, batting out of order, allowing a run on a sacrifice fly to second, and refusing to move on from Jose Reyes. Their MLB-best 11-1 start had quickly turned into a nightmare, and while they were getting great pitching performances from the likes of Jacob deGrom and Noah Syndergaard, those weren’t often translating into wins. And now, Syndergaard has been added to the DL with…hand, foot, and mouth disease?

The Mets are putting Noah Syndergaard on the DL. He contracted hand, foot and mouth disease.

This is certainly something to add to the lists of weird baseball injuries, but it’s also something that could be pretty painful for Syndergaard. As per the federal Centers for Disease Control and Prevention, the disease most commonly affects children younger than five, but “can sometimes occur in older children and adults.” And it doesn’t sound pleasant:

It usually starts with

One or two days after the fever starts, painful sores can develop in the mouth (herpangina). They usually begin as small red spots, often in the back of the mouth, that blister and can become painful.

A skin rash on the palms of the hands and soles of the feet may also develop over one or two days as flat, red spots, sometimes with blisters. It may also appear on the knees, elbows, buttocks or genital area.

Some people, especially young children, may get dehydrated if they are not able to swallow enough liquids because of painful mouth sores.

That seems not terribly fun. The disease can be passed along from sneezes or hugs from an infected person, or even from touching a doorknob they touched and then touching your eyes or mouth. As per Mike Puma of The New York Post, the Mets believe Syndergaard contracted it working at a youth camp, and as per Jon Heyman of MLB Network/Fancred, he’s being kept away from the team to avoid further spread of the disease. They’re also taking handwashing precautions, but it could be too late:

Some Mets did come in contact with Noah Syndergaard, which is how hand foot and mouth disease is contracted, so they're keeping an eye on everyone and have made it clear everyone needs to be vigilant about washing their hands.

The timing here is also interesting. The non-waiver trade deadline of July 31 is fast approaching, and there has been talk that the Mets might move Syndergaard and other stars now they’re out of contention, but having him out with a disease like this might hurt his appeal. He also went on the DL earlier this year with a strained finger ligament. But still, he’s a 25-year-old starter who has been great, posting a 2.89 ERA both this year and for his four-year MLB career and posting 2.1 wins above replacement (per Baseball Reference) this season, and that should create quite the market for him. Hand, foot and mouth disease or not.