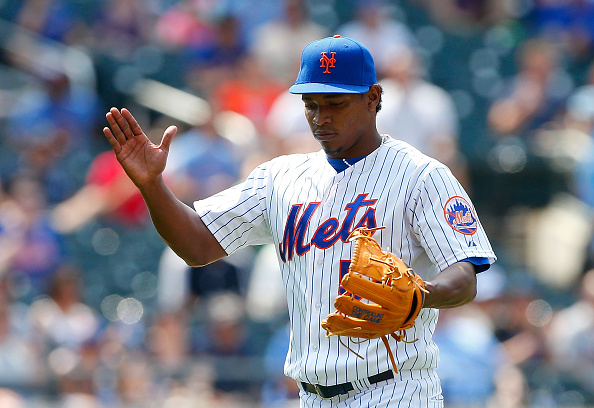 Three strikes and Jenrry Mejia is out.

The New York Mets pitcher became the first player in history to be permantely suspended by Major League Baseball for multiple PED violations after testing positive for the banned substance Boldenone, his third PED violation.

The 26-year-old was the Mets closer in 2014, locking down 28 saves. He was set to become the closer again in 2015 but injured his elbow on opening day. While on the DL, he tested positive for Stanozolol and was suspended 80 games. In late July he was suspended again for a full season after testing positive for Boldenone. Mejia ended up appearing in just seven games in 2015, throwing seven scoreless appearances. This third suspension marks the third time Mejia has been suspended in under a year, which is certainly a dramatic way to get yourself banned. As Rubin notes, this is the second time Mejia has tested positive while serving a suspension for PEDs.

Mejia tested positive for boldenone, the 2nd time he was nailed for it. It's old school, unsophisticated, easily detectable. Career suicide.

He also tested positive previously for stanozolol, same level of sophistication. He wasn't even trying to avoid detection.

Mejia becomes the first player banned under commissioner Rob Mandred and joins Pete Rose as a former player blacklisted by the league.

Mejia can apply to be reinstated in one year, but he’ll be forced out of action a minimum of two years if the MLB approves it. At 26-years-old I’d wager that’s exactly Mejia will do. Still, what a way to go. You’d think Mejia would have learned his lesson.