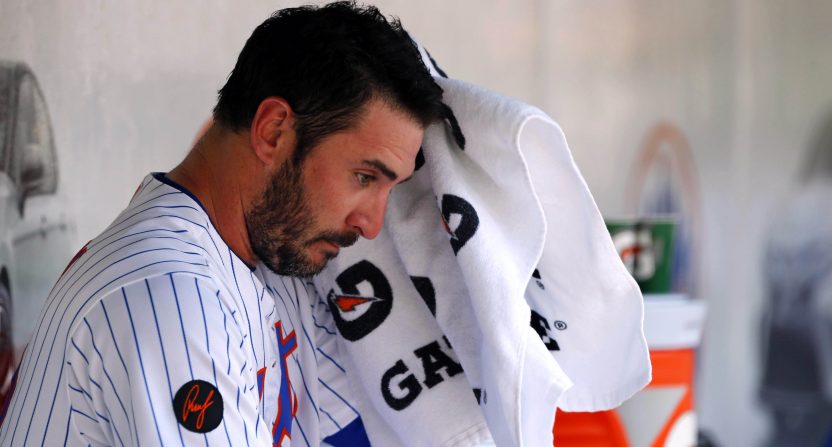 The Matt Harvey era in Queens has come to an end.

On Friday, Mets general manager Sandy Alderson announced that Harvey had declined an assignment to Triple-A and will be designated for assignment.

Sandy Alderson says the team met with Matt Harvey and asked him to accept an assignment to the minors. Harvey declined and will be DFA’d tomorrow.

Alderson told reporters Friday that he, manager Mickey Callaway and pitching coach Dave Eiland met with Harvey and pitched him on the idea of rebuilding himself in the minor leagues. Harvey, 29, was not interested, so the Mets cut bait. They will now have seven days to trade him or release him outright.

And just like that, one of the most accomplished Mets of the 21st century is out of a job.

It’s easy to forget now, but Harvey was an All Star-caliber pitcher not so long ago. In 2015, fresh off Tommy John Surgery, he posted a 2.71 ERA with 188 strikeouts in 189 innings, then led the Mets to their first NL pennant in 15 years. In Game 5 of the World Series, he threw eight scoreless innings before blowing a lead in the ninth (when he arguably shouldn’t have been pitching), and although the Royals won that game to seal the series, the future looked bright for Harvey and the Mets both.

But Harvey stumbled in 2016 and eventually hit the disabled list with thoracic outlet syndrome. In 2017, he made headlines more for his personal life, late-night antics and truancy than for his pitching and wound up with a 6.70 ERA on the year. He followed up with a slow start this spring, found himself in the tabloids again, got demoted to the bullpen, struggled there, and eventually left Alderson and company with little choice but to do something drastic. It all happened fairly fast and yet might as well have unfolded in slow-motion.

One thing we can say with some confidence: Harvey will resurface elsewhere. He has too much talent, too much potential and too much history of success to fade away entirely. As Alderson said Friday, “My guess is that there are people out there who are willing to take a shot on Matt Harvey.”