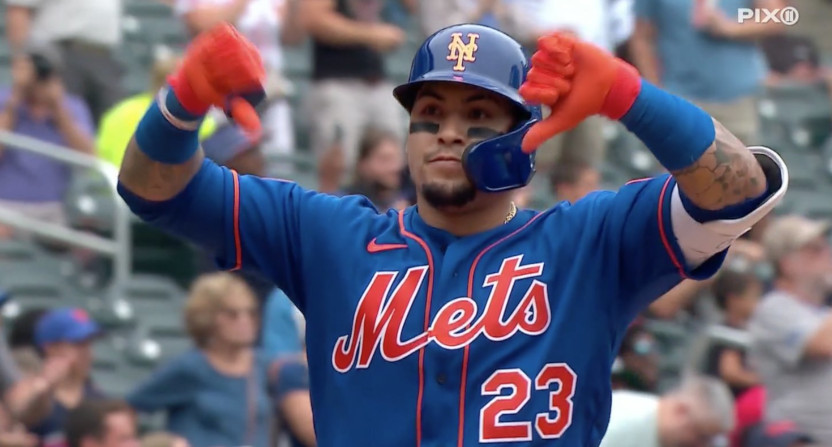 The New York Mets have been struggling lately, losing seven of their last 10 games, and they’ve been hearing boos from their fans. Amidst that, second baseman Javier Báez told reporters Sunday (following a 9-4 win over the Washington Nationals) that the thumbs-down gesture he and other players have been making (Báez made it Sunday after hitting a 444-foot home run in the fourth inning) is a criticism of the booing fans. Here’s some of that, via Deesha Thosar of The New York Daily News:

Javy Báez said the Mets' new thumbs down celebration is a response to fans booing the team.

"We're not machines, we're going to struggle. … It just feels bad when I strikeout and I get booed. … We're going to do the same thing to let them know how it feels," he said. pic.twitter.com/CYkHVpE2KH

Here are more comments from Báez, via Tim Healey of Newsday:

Javier Baez said Mets' thumbs-down celebration after big hits is a message to fans, who have booed him & others.

"In my case, they (the fans) gotta be better," Baez said. "It’s just how I feel. I love the fans I like playing for the fans, but we can’t have our fans against us."

That led to a lot of online debate, both from people supporting Báez and the players and from people opposing them. Later Sunday, though, Mets’ president Sandy Alderson cast his lot in with the “opposing” camp with a statement. Here’s that full statement:

In a post-game press conference today, Javy Baez stated that his “thumbs down” gesture during the game was a message to fans who recently have booed him and other players for poor performance. These comments, and any gestures by him or other players with a similar intent, are totally unacceptable and will not be tolerated.

Mets fans are understandably frustrated over the team’s recent performance. The players and the organization are equally frustrated, but fans at Citi Field have every right to express their own disappointment. Booing is every fan’s right.

The Mets will not tolerate any player gesture that is unprofessional in its meaning or is directed in a negative way toward our fans. I will be meeting with our players and staff to convey this message directly.

Mets fans are loyal, passionate, knowledgeable and more than willing to express themselves. We love them for every one of these qualities.

It’s remarkable to see an organization president side with fans rather than his team’s players, especially when those players are pushing back on booing in what seems to be a rather mild way. If Báez hadn’t discussed the meaning of his thumbs-down gesture here, it might never have been interpreted that way. Now, this has led to a whole lot of drama, and to the organization seemingly throwing Báez (who they just traded for last month) under a large bus, and saying that he can’t push back at all at fans booing him.