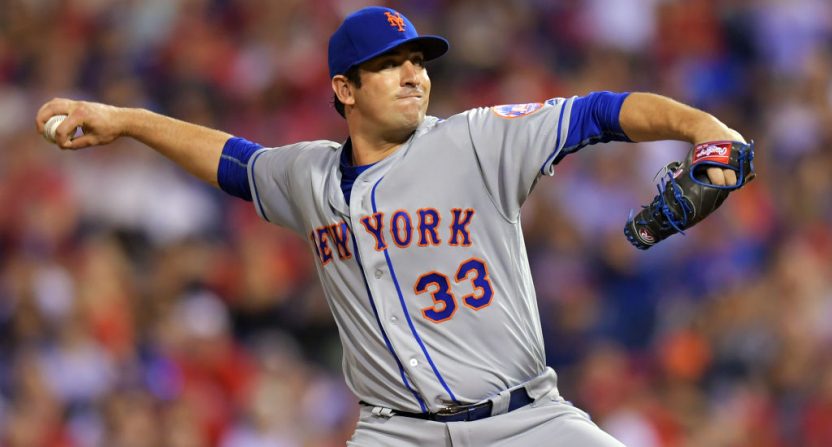 Here’s the latest episode in the dysfunctional saga of Matt Harvey and the New York Mets.

When Harvey did not show up at the ballpark for Saturday’s game against the Marlins because of a migraine headache, he  received a surprise visit from team security at his Manhattan apartment, according to Jon Heyman of FanRag Sports.

Harvey, who was then suspended on Sunday for three games, had texted pitching coach Dan Warthen earlier to let him know he was under the weather and wouldn’t show at Citi Field for the game. Harvey has a history of being late, and he missed the 3 p.m. deadline to request the day off on Saturday, which led to the suspension. The New York Daily News reported that Harvey was “disciplined for a compilation of issues dating back to last year,” so his history has apparently played a role here.

Based on Heyman’s report, the encounter with team security certainly seemed a bit awkward as Harvey answered the door in his pajamas, and possibly even a bit tense depending on who you talk to:

Harvey, it seems, sensed the Mets were checking up on him with their surprise visit around 10 p.m. (to see if his headache story checked out). Meanwhile, people close to the Mets suggest that, after many messages went unreturned, the security men were merely checking on him (to see if he was OK, or needed help).

Harvey is said to have answered his own door in his pajamas, and word from people who’ve spoken to him is that the Mets emissaries weren’t doctors or caretakers but rather people who quizzed him about about what was going on with him. The implication he apparently got: the team was checking to see if he was really at home, and really ill. (He definitely was at home; on that score everyone agrees.)

Harvey is considering filing a grievance over the suspension. For now, the team has decided he will miss his start Wednesday to avoid a “hostile environment” at Citi Field, according to the New York Post‘s Mike Puma, and then return to the mound Friday in Milwaukee.

So the drama in Queens is far from over.