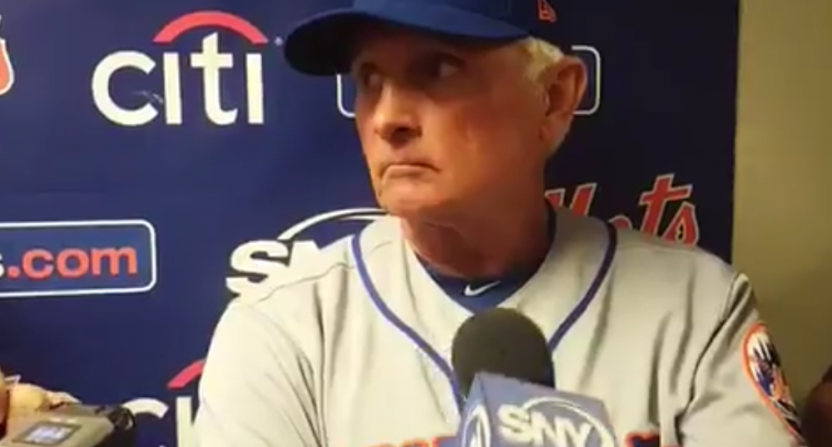 The New York Mets’ horrendous April continued Sunday with the loss of star pitcher Noah Syndergaard in the second inning against the Nationals, which led to a 23-5 rout and an amazing meltdown from manager Terry Collins. After the game, Collins gave some terse answers to reporters asking about several aspects of the injury, including Syndergaard’s decision to decline a MRI after he was scratched from his last start Thursday, and he really melted down when a reporter noted he looked upset about the injury. Here’s video, via MLB.com Mets reporter Anthony DiComo:

Collins declined to comment on the MRI, citing general manager Sandy Alderson’s previous remarks on it (which included “I can’t tie him down and throw him in the tube”), then tersely answered another question as to if he saw anything wrong with Syndergaard with “He threw 100, he was throwing 100. I saw nothing wrong physically.” However, the third question, which started with “You seemed pretty upset yourself” appeared to push Collins over the edge, leading to him interrupting with a “You think?! What do you think?!” He then sits there staring straight ahead until someone asks another question of “How big of a blow is this for this staff?”, responding only “It’s big.”

It’s understandable why Collins is frustrated. His team just suffered one of the worst losses we’ve seen in baseball recently, and they lost their star pitcher along the way. And when you add that to a growing list of injuries that includes Yoenis Cespedes, Lucas Duda, David Wright, Wilmer Flores, Steven Matz, Seth Lugo and Brandon Nimmo, plus the team’s 10-14 record so far and a litany of criticisms for Collins and Alderson, it’s possible to understand why Collins got so mad here. (Plus, “You think?!” does seem like a somewhat fair response to an obvious question about if he was upset to lose his star pitcher.) Still, this moment produced a great managerial rant at the least. And if Syndergaard is out for any length of time, we might get a few more rants from Collins.