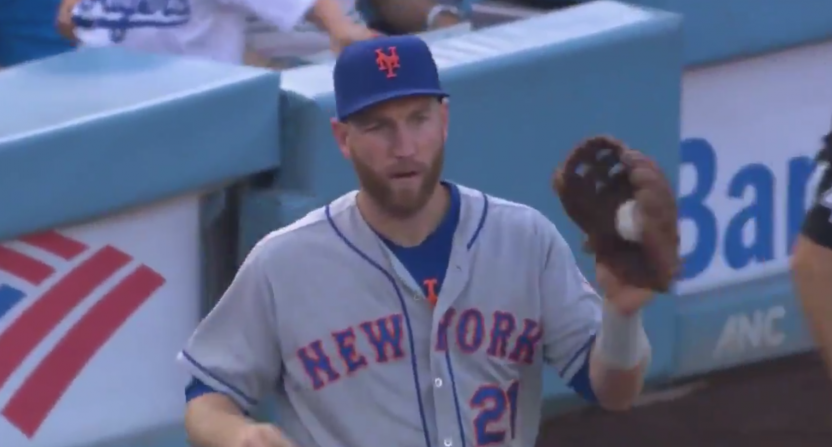 Look, when the New York Mets do something good, even if it’s shady, you have to call attention to it. It’s not like that happens very often.

During Monday’s game against the Los Angeles Dodgers, Mets third baseman Todd Frazier tumbled into the stands to make an impressive catch on a foul ball. After diving into the stands, he emerged with the ball in hand. The ump called it as an out and then he quickly tossed the ball back into the stands.

Now we all know that Todd Frazier caught that foul ball, but what the Mets’ broadcasters started presupposing was, maybe he didn’t? Upon replay, they noticed that Frazier actually appeared to pull a fast one on third base umpire Mark Wegner. Turns out that while on the ground, Frazier actually grabbed a rubber baseball that had fallen onto the ground. Steve Gelbs of SportsNet New York took a closer look and figured it out.

Confronted with the evidence, Frazier came clean and admitted since he was playing in Los Angeles he wanted to bring a little “Hollywood” to the game.

“It is Hollywood, so sometimes you have to act out a little bit,” said Frazier. “Basically I caught the ball going in the stands and as I came down the ball came out. After seeing the replay there was another ball there and the first ball I saw I picked up and raised my hand up and [Mark Wegner] called him out. It was just one of those things where I thought real quick, I had a split-second, and if there wasn’t a ball there I didn’t have a shot to get him out.”

“It was one of those things where I think any third baseman or any player trying to win would do it.”

"It's Hollywood, sometimes you have to act out a little bit"@FlavaFraz21 breaks down how he tricked an umpire with a rubber ball, and how he thought about giving it to Jacob deGrom to pitch pic.twitter.com/CFokpzPZER

Next time Frazier goes diving into the stands, expect the umpire to have a bit more critical of an eye when he emerges with the ball in his glove.