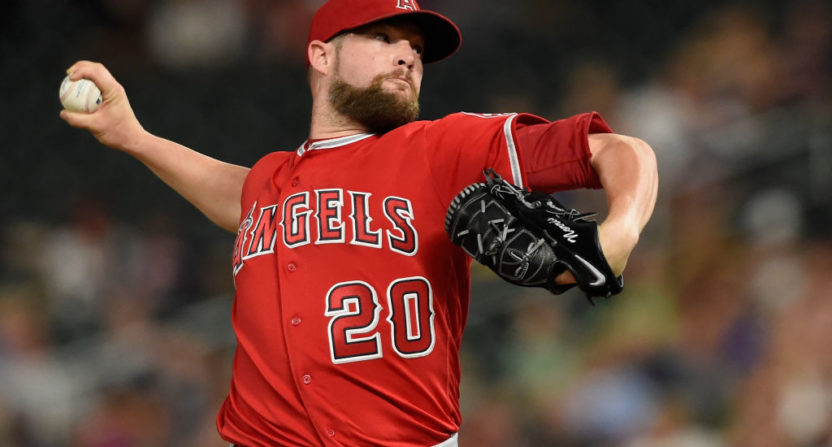 On Sept. 15, the Los Angeles Angels, short-handed in the rotation due to an Andrew Heaney injury, tabbed Bud Norris to start a crucial game against the Rangers. This was odd for the simple reason that Norris had made 56 appearances on the season, all of them out of the bullpen. The last time Norris had gotten more than four outs in appearance had come on April 11. The Angels, meanwhile, had other options: They could have gone with Jesse Chavez, who started for more than half the season before being demoted to long relief, or at least Yusmeiro Petit, a man who has been making multi-inning appearances all season and started a game in July.

So why did the Angels choose Norris? Could it maybe have to do with the fact that, as pointed out by Pedro Moura of the Los Angeles Times, Norris has a clause in his contract awarding him a $500,000 bonus for making 60 appearances and that by starting him instead of using him out of the bullpen they could keep his appearance count down?

But wait, there’s more! Moura notes that Chavez, who has made 21 starts this year, stands to make an extra $250,000 if he reaches 22 starts and another $250,000 if he gets to 24 starts. Suddenly it makes that why the Angels didn’t choose him to start against Texas last week—and why he hasn’t started a game since July.

Angels general manager Bill Eppler told Moura that this usage is “just a coincidence,” but it is essentially impossible to believe that, given how both Norris and Chavez have been stopped just shy of their bonuses being triggered.

The craziest part of this is that the Angels are in the thick of a playoff race, currently a game and a half behind Minnesota for the second wild-card spot. They wound up winning that game against Texas that Norris started (in which Chavez, out of the bullpen, through more pitches than Norris did and Petit saved the day with two strong innings), but who knows if they have cost themselves elsewhere with these shenanigans. Norris has struggled in the second half, but he’s still a useful reliever, and the Angels could be costing themselves games—and therefore a shot at the playoffs—by holding him back to save a couple dollars. Meanwhile, what kind of lesson does it send to players and agents if you’re willing to go so far out of your way to deny guys their incentive bonuses?

We’ll soon see just how committed to this ruse the Angels are. The team will need a starter Saturday against the Astros and will have the same options they did before: Norris, Chavez and Petit. Regardless, Los Angeles has 12 games left, and Norris needs to pitch in only two of them to get his half-mil. If he doesn’t get there, it will be unmistakably apparent what has gone on.