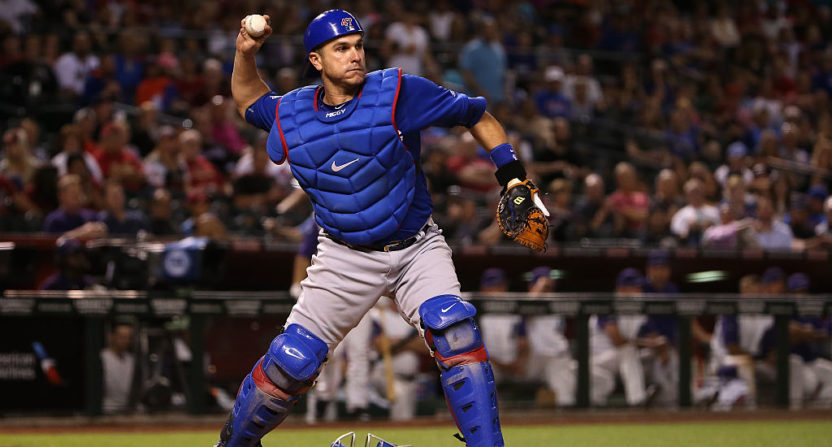 Chicago Cubs catcher Miguel Montero is known for speaking his mind, and it made him a fan-favorite — particularly with his tweets — during the team’s World Series run last season. It’s refreshing to hear a professional athlete be straight-up on topics, when we’re used to hearing so much robotic talk and clichés from them.

But there is a line, of course, when it comes to honesty. There are just some things you shouldn’t say, and Montero unfortunately has now provided multiple examples of this since last November.

The first one came on the day of the Cubs’ WORLD SERIES PARADE, when Montero went off on ESPN 1000 radio in Chicago about his lack of playing time during the postseason run and Joe Maddon’s lack of communication with him about it, and even seemed to criticize Maddon’s use of then-closer Aroldis Chapman:

“It was different for me,” Montero said to the Waddle and Silvy Show on ESPN 1000 on Friday. “It was a different emotion because I didn’t get a chance to play. I was a little disappointed, to be honest, because I felt like I did a good job in the regular season but was left out a little bit. It made me feel a little like not important or maybe not as good to be in this lineup.”

“I think the toughest part for me is they never communicated with me,” Montero said. “I’m a veteran guy. They talk about veteran leadership. I have 11 years in the game and two All-Star [appearances]. I expected to be treated a little better. I was expected to get communication. Just let me know. Put me in the loop. That was the toughest part for me because I never understood what my role was going to be.”

“Catching the last two [innings] of the World Series made it sweet,” Montero said. “Otherwise, it would have been nice because I’m part of it but maybe I didn’t help as much as I wanted to help. To be more involved … I would have felt bad to go home with the trophy and not even catch one inning in the World Series. That would be the tough part.”

“He [Chapman] could be tired?” Montero asked rhetorically. “Of course he was tired. The guy threw 40 pitches two days ago. You have guys in the bullpen doing the job all year — they should be able to help, too.”

Saying those things publicly is never a good idea, but on the day of the championship parade? That’s really not a good look.

However, Montero and Maddon cleared the air in February, and the fact that Montero is owed $14 million in 2017 surely played into the Cubs’ decision to keep him around. The Cubs also likely assumed that Montero had learned his lesson about being overly honest with the media.

Fast-forward to Tuesday. The Washington Nationals ran wild on Montero and pitcher Jake Arrieta, with seven stolen bases in a 6-1 victory. That makes Montero 0-for-31 this season in throwing out runners on stolen base attempts (and most of the throws really haven’t been all that close).

#Cubs Montero has not thrown out a base stealer this season. Came into the game 0-for-24 on attempts

But after the game, Montero pretty much blamed the stolen bases on Arrieta (and the Cubs’ pitchers in general this season):

Miguel Montero had some thoughts on those stolen bases… ??? pic.twitter.com/PwELkTTs8t

Now, Montero isn’t necessarily wrong about Arrieta, who is indeed one of the easiest pitchers to steal against in baseball due to his slow delivery (but it’s worth noting that Cubs catcher Willson Contreras is 2-for-5 in throwing out base-stealers with Arrieta pitching).

But whether Montero’s right or not doesn’t at all matter here. You can’t throw your teammates under the bus like that. Especially when the Cubs expect Montero — 34 in July — to be a veteran leader on a team full of young players. Especially when this isn’t a one-time incident of Montero complaining to the media about (important) members of his organization.

So, it will be interesting to see if the Cubs let this one slide too, but team president Theo Epstein can’t be happy with the comments.

And while Montero has great framing and game-calling skills, as well as a solid bat for the position (.805 OPS), he’s a replaceable backup catcher. If stars like Anthony Rizzo, Kris Bryant, or Jon Lester had incidents like these, the Cubs would obviously still find a way to make it work, because talent pretty much always wins out.

But for a replacement-level backup catcher that can’t throw anyone out (even if the pitchers really are partly to blame)? Don’t be surprised if Epstein and the Cubs decide they’re ready to move on from Montero, or at least bench him for a few days to once again try to get the point across that there are just some things you can’t say to the media.