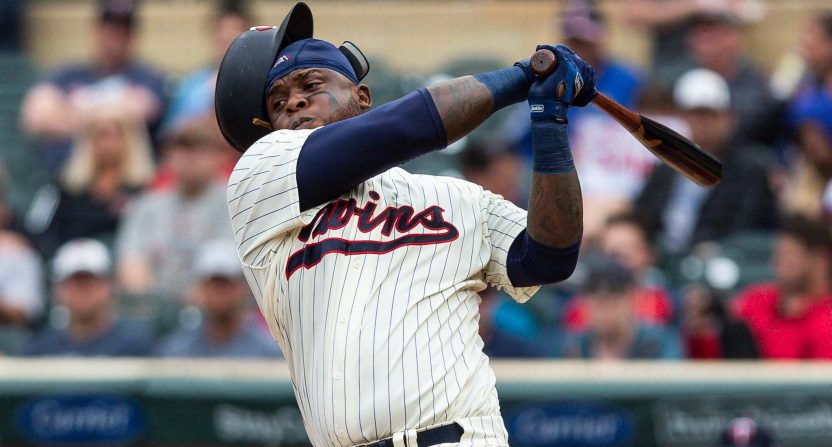 The Minnesota Twins announced Thursday that they have demoted 2017 All-Star Miguel Sano. Not down in the lineup. Not to the bench. Not even to Triple-A. All the way down to their Single-A affiliate in Fort Meyers, where he will attempt to turn around a disappointing age-25 season.

Sano has struggled all year long, batting .203/.270/.405 while playing his typical clumsy defense at third base. He has occasionally had his effort level called into question, but Minnesota manager Paul Molitor said that was not why he had been shipping out. Via ESPN:

Molitor told reporters he wasn’t unhappy with Sano’s effort, but believed the move would help the 25-year-old work on all parts of his game.

“We’re going to get him down there and give him an opportunity to get things back on track,” Molitor said. “We don’t feel like we’re getting what we need from him, and he’s going to have to get down there and get to work.”

Sano’s year has been… eventful, since even before the season began. In late December a photographer accused Sano of aggressively flirting with her, trying to kiss her and attempting to drag her into a hallway. He proceeded with Spring Training even as most observers assumed he would face suspension, before MLB announced just before Opening Day that it would not punish him. Sano then failed to perform up to his standards in April and May and truly fell off in June, hitting only .162/.225/.243.

Sano’s struggles are just one component of a fairly disastrous season for the Twins. Two and a half months into the season, Minnesota stands 29-36, six games back of Cleveland in the AL Central (and 13.5 games back of a wild-card slot) and has only a 4.9 percent chance to reach October, per FanGraphs.

It hasn’t been one thing for the Twins, it has been just about everything. Byron Buxton struggled and then got hurt, Brian Dozier has regressed, Logan Morrison has disappointed, the pitching staff has been inconsistent, and with the exception of Eduardo Escobar, no one has really stepped up.

And now the team’s nominal best player is headed to Single-A. Seems safe to say this is not Minnesota’s year.