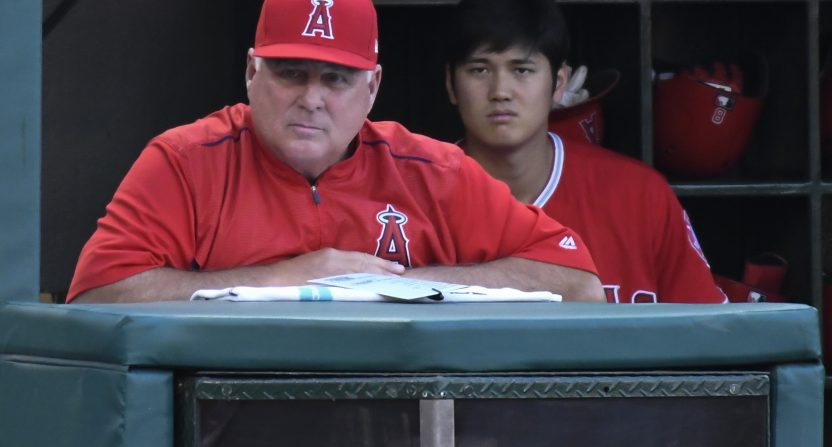 The Athletic’s Ken Rosenthal reports that Los Angeles Angels manager Mike Scioscia will step down from the position when the 2018 season ends.

Scioscia, nearing the completion of a 10-year, $50 million contract, is expected to step down at the end of the season, according to major league sources. His decision not to pursue a new deal would be his alone and not the result of pressure from the club, sources said.

Scioscia, 60, has managed the Angels for 19 seasons, which is certainly an incredible achievement these days in professional sports. As Rosenthal notes in the article, it’s the longest active managing streak with one team, and is the sixth-longest managing tenure in MLB history.

The former All-Star catcher led the Angels to six division titles and a World Series championship in 2012. He’s won the AL Manager of the Year award twice.

However, things haven’t gone as well for Scioscia and the Angels in recent years.

The Angels (55-57) are on the verge of their third consecutive losing season, despite entering the season with plenty of promise led by the addition of Japanese two-way star Shohei Ohtani. And this is all with having the best baseball player on the planet, Mike Trout. Injuries have been a huge part of it and the roster construction has been flawed (particularly with its dependence on pitchers with rough health track records). But owner Arte Moreno and general manager Billy Eppler may be ready for change anyway, and that could also serve as a way to deflect the blame for the Angels’ third straight disappointing season (even though it’s far more a roster and health problem than it is the manager).

So who could replace Scioscia as the new skipper in Anaheim? Rosenthal names Brad Ausmus, Eric Chavez, and Josh Paul as in-house candidates.

Three potential successors to Scioscia already work for the Angels — former Detroit Tigers manager Brad Ausmus and former major league third baseman Eric Chavez, both of whom are special assistants to Eppler; and former major league catcher Josh Paul, who is in his first season as Scioscia’s bench coach. Paul has not managed above Class A. Chavez has never managed.

Despite what the last few seasons would suggest, this should be a very attractive job. For one, having Trout immediately gives you 7-to-11 wins above replacement on paper. Then of course there’s Ohtani, and some promise overall on the pitching staff (if it can stay healthy, of course). It’s not hard to see this team quickly becoming a contender again with a few breaks and a few smart roster moves.

So, Moreno and Eppler should be able to get who they want for this job, and if Scioscia’s exit is on good terms, he’ll probably have some valuable input as well.