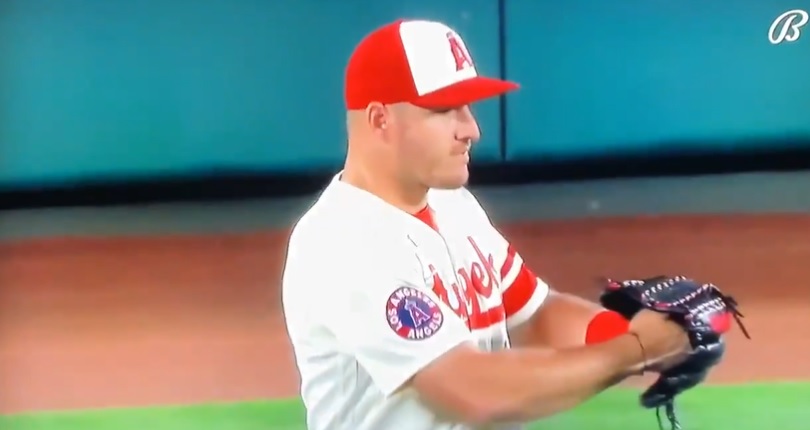 After Tuesday’s loss to the Chicago White Sox, the Los Angeles Angels might consider asking Mike Trout if he wants to be the pitching coach.

The Angels led 3-0 by were done in by a pair of five-run innings for Chicago. One came in the fifth innings, which gave the White Sox the lead. Two innings later, Chicago scored five innings to effectively put the game away. In the outfield, Trout noticed something — pitcher Elvis Peguero was tipping his pitches. It was clear to anyone watching the game that Trout was growing frustrated.

guy looks so fed up pic.twitter.com/e2UPQDMW5h

There has been a pressing and unavoidable narrative in Trout’s career. While he’s a generational talent, the Angels have never been able to get adequate help around him. This is true even as they’ve added an even more unique talent in Shohei Ohtani. Trout has played in only one playoff series in his MLB career and Ohtani has yet to even do that. Whether it’s bad roster construction or bad luck, the team just can’t win.

Seeing Trout calling one of his teammates out for tipping his pitches only fed further into that narrative.

This is tragic. Send an extraction team for him and Ohtani. https://t.co/JUHU4mNKsQ

I know he chose to stay with this franchise. But it’s hard to not feel bad for him🥲 https://t.co/wpoUOxuIgs

Well, it’s sad that he has to tell them that they are tipping their pitches and not the pitching coach. https://t.co/njIAoPtnv2

I’ll never understand how players, broadcasters, and fans watching on tv catch this before the pitching coaches do lol. https://t.co/TBRnjN668Q

The fact that Matt Wise is still the Angels pitching coach is concerning. He clearly has little to no knowledge. #GoHalos https://t.co/cIfQi6LYDx

Tipping pitches happens. Peguero is not the first pitcher to do so and will not be the last. That is not the story, nor is it that he got hit hard.

What’s hard to understand is how Trout, who’s out in centerfield, is the one to pick up on this. This should be the job of the pitching coach, manager or someone else on the coaching staff.

The best teams in baseball make mistakes. But the right people on those teams notice those mistakes and find ways to correct them. The Angels, meanwhile, are relying on their star centerfielder to make observations on how a struggling reliever might turn things around. That’s never going to be a recipe for success.