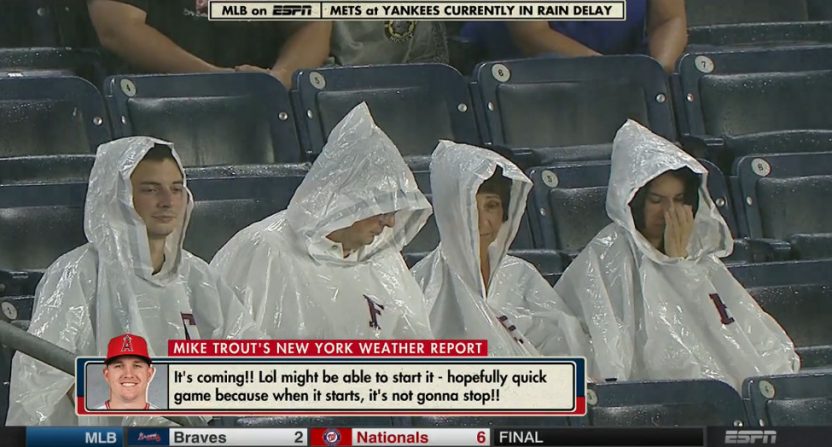 The MLB All-Star Game saw a weird controversy around Los Angeles Angels’ star Mike Trout, with a Washington Post piece citing Q Scores to suggest that Trout is only as well-known in the U.S. as Kenneth Faried, MLB commissioner Rob Manfred blaming Trout for that with quotes like “He has to make a decision to engage,” and the Angels’ social media account defending Trout as an “exceptional ambassador,” a sentiment echoed by many on Twitter. Well, Trout got some extra publicity from a MLB partner Sunday night on an ESPN broadcast leading up to a game he wasn’t even involved with, and earned that for a topic he’s often discussed; the weather.

During rain ahead of the Mets-Yankees Sunday Night Baseball clash (which was eventually rained out and postponed to August 13), ESPN’s Buster Olney texted Trout (who had a nice day himself Sunday in a 14-5 Angels win over the Houston Astros, including a 418-foot home run) to ask about the chances of Mets-Yankees being played. Trout answered, and ESPN’s Matt Vasgersian read his response to Olney on air:

On one level, this is somewhat justifiable. With rain like that, the deciding question for the broadcast is if the game is going to be played. And yes, Trout’s thoughts on the matter aren’t as important as those of an actual weather anchor, but unlike a local news channel, ESPN presumably doesn’t have a ready-to-go New York meteorologist they can just throw to. And it’s been well-established how much attention Trout pays to the weather, so it’s not like his comments are completely uninformed. (In fact, they wound up being pretty apt.) And having a top baseball player with such an interest in meteorology weigh in on the weather seems better than just having the booth of Vasgersian, Jessica Mendoza and Alex Rodriguez discuss it. And this is a whole lot better than other things that have shown up on the broadcasts, such as, say, Vasgersian’s thoughts on bachelorette parties.

Beyond that, though, it’s interesting to see this happen so shortly after a giant controversy that saw claims including “Trout isn’t famous enough,” “MLB isn’t doing enough to promote Trout,” and “Media outlets aren’t doing enough to promote Trout.” And while having Trout weigh in on the weather in New York from across the continent isn’t going to be universally well-received, it’s at the least pretty good promotion for him. He’s showing up (via his text at least) on a prominently nationally-televised broadcast, and they’re highlighting one of the more notable things about him.

That doesn’t mean that this is any level of “Promote Trout at all costs” conspiracy. For one thing, Manfred and other high-ranking MLB executives presumably have more important things to worry about than if Trout is mentioned on a particular broadcast. And even if they did want to try and get Trout some more attention in general (which isn’t proven) and asked ESPN to help there (which definitely isn’t proven), there’s no guarantee the network would go along with that. Even if there was some coordinated ESPN move to promote Trout after this controversy, it would be more likely that it would show up on things like SportsCenter (where there’s a whole lot of editorial judgement and flexibility in choosing highlights) than in an unrelated Sunday Night Baseball game.

It seems more likely that this is just Olney and/or his producers thinking “We have a weather situation, we have the number of a player in Trout who cares about the weather, let’s reach out and see if he says anything notable and throw it on camera if he does.” And that’s logical thinking, and it helped make the broadcast a little more interesting (which is the crucial goal here). But it is funny that Trout got some major on-air publicity in an unrelated primetime game so soon after a whole controversy about how he wasn’t famous enough and wasn’t promoted enough. And it’s particularly funny that it happened for one of the few notable off-field traits Trout has displayed, his interest in the weather. Maybe Trout doesn’t need to change that much after all.