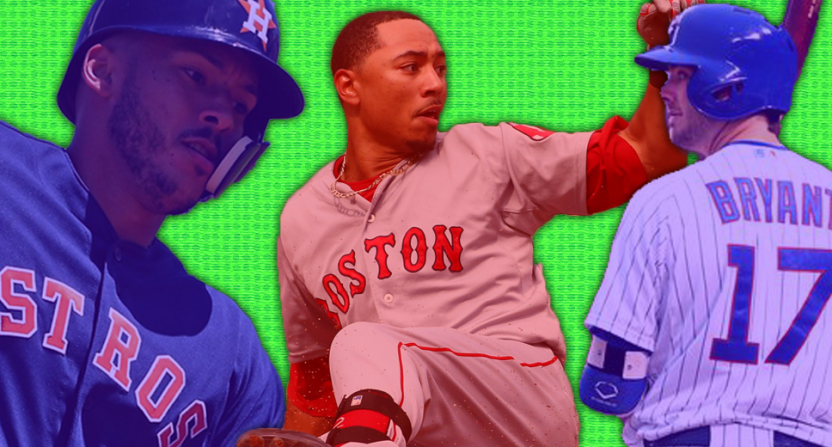 Last May, we declared unequivocally that Mike Trout was the best player in baseball and asked our writers to name the second best, with Bryce Harper, Josh Donaldson and Clayton Kershaw drawing votes.

A year later, the situation hasn’t changed much. Trout remains at the top of the league, no matter what a few overly zealous Mookie Betts supporters might say, and the field after him remains crowded and confusing.

So we’re trying it again. We asked our writers to name the second-best player in baseball. Here are their responses:

Who is the second best player in baseball?

Matt Clapp: I can say with confidence that… I don’t know!

But because I have to give an answer, I guess I’ll go with Betts. The Boston right fielder is an outstanding all-around player and currently leads position players in WAR per Fangraphs at 3.9. He currently leads the majors in batting average (.362), homers (16), slugging percentage (.751), wRC+ (212), and wOBA (.490), and OPS (1.188). He’s second in on-base percentage (.436), and fourth in stolen bases (12). He hits for power, average, doesn’t strike out much, gets on base at a tremendous clip, and adds value on the basepaths. And he’s an outstanding defensive right fielder, with his 31 defensive runs saved in 2017 ranking behind only Angels shortstop Andrelton Simmons.

Betts is also just 25, and it’s possible we still haven’t seen his best season. That’s really saying something when you consider that he was worth 8.3 fWAR in 2016, behind only Trout. And he’s behind only Trout in fWAR since 2016.

Again, you could argue a lot of players, but Betts is probably the safest call here and may still be an ascending talent.

With all that being said, my answer is Kris Bryant. In his first three years in the majors, Bryant has cracked six wins in all three, has never had a wRC+ lower than 136, and he can play a whole bunch of positions on the field pretty well.

Andrew Bucholtz: There are plenty of contenders for MLB’s second-best player, but my pick is Indians’ third baseman Jose Ramirez. Ramirez is one of only four players in the top 10 in Baseball Reference WAR in both 2017 (6.9, ninth) and 2018 so far (3.1, fourth), with the others being Mike Trout (who I’d pick as MLB’s best player), Max Scherzer and Andrelton Simmons. Ramirez also is top 10 in Fangraphs WAR both last year (6.7, eighth) and this year (3.4, third). He’s hitting .297/.393/.604 with 14 home runs so far, and he’s a solid and versatile defender as well. This year’s seen him playing mostly at third with a couple of DH appearances, but he played 71 games at second and 88 at third last year and impressed in both positions. And he’s only 25 years old and in just his fifth full MLB season; we may see great production out of him for years and years to come.

Alex Putterman: I came into this question determined not to overreact to Betts’ remarkable start to the season. But as I started playing around with FanGraphs leaderboards, I realized that Betts not only leads baseball in WAR this season, but also ranks fourth since the start of last year, second since the start of 2016 and third since the start of 2015. The only non-Trout player who comes close to matching him through that lens is Bryant, who has been more consistent but with a lower ceiling.

Plus, the longer Betts continues at his current torrid pace, the more reason we have to believe that he has turned a corner in 2018 and become not only an elite player but also a reliable superstar. If a player is batting .362/.436/.751 in April, you can pat him on the back and wave the numbers away as products of early-season craziness. But if he’s maintaining that preposterous line in late-May, you have little choice but to take him serious as one of the absolute best in the game.