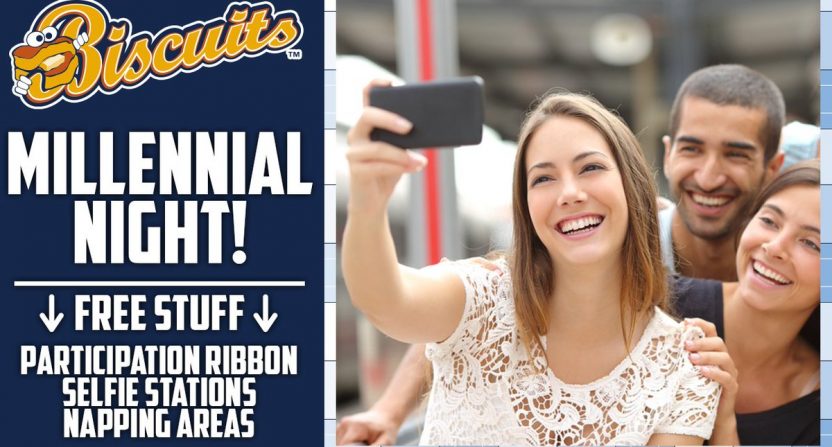 Millennials, ruiners of all things, are back on their (perceived) bullshit.

Attracting younger fans should be something of a priority for baseball teams. The sport has the oldest demographic base of the four major U.S. sports and needs all the help it can get to offset its long required time commitment, long regular season, long breaks in between pitches, and general long-ness.  The last thing it probably should be doing is annoying those under the age of 35.

But, of course, some of us just can’t help ourselves when it comes to millennials. The Montgomery Biscuits, the Double-A affiliate of the Tampa Bay Rays, decided to hold a Millennial Night promotion during an upcoming game. All of the classic hits were included. Participation ribbons. A place to take a nap. Selfie stations. A large supply of avocados. Everything short of a college loan debt forgiveness raffle was on the ticket.

Want free things without doing much work? Well you're in luck!

Riverwalk Stadium will be Millennial friendly on Saturday, July 21st with a participation ribbon giveaway just for showing up, napping and selfie stations, along with lots of avocados 🥑

To get semi-serious for a second, millennials are pretty much tired of all this bullshit, mostly because the things they’re often blamed for “ruining” or “destroying” were outdated notions of happiness that the baby boomer generation valued but they don’t, which is actually just fine (sorry, Applebee’s). Not to mention the state of the world that baby boomers have left for millennials to clean up, and you can kinda understand why they’re officially done with the whole millennial ridicule thing (Also, do older people think millennials are all 21-years-old? Plenty of them have kids of their own who are already bored of baseball.).

So, as you might imagine, the reaction to Millennial Night has not exactly been endearing. And if the plan was to actually get those people to show up and pay money for the game, then it may have backfired (unless the plan was simply to get publicity, in which case, it worked brilliantly).

Riiiiight. Because the best way to drum up business is to ostracize an entire demographic.

Say it louder for the people in the back: Brands should stop trying to be funny. https://t.co/Ox1mU94g0M

Coming early August: Boomer night, where proof of a high school diploma wins you a high paying job, and arts and crafts tables will be available for you to burn down a diorama of the U.S. economy while complaining about entitlement https://t.co/0uoQduSg5u

All of your players are millennials.

The Biscuits seem to be holding strong on the promotion, or at least the ideology behind it. Perhaps they’ve made the point they were trying to make, that millennials are too “entitled” to attend a minor league baseball game. If that’s the case, however, that doesn’t bode well for the team’s long-term prospects.

Offended? Feel free to fight your battles IRL and visit us at Riverwalk Stadium. Any millennials that actually come by during office hours before next Saturday and submits a valid complaint in person to our "Millennial Night Thinktank" may get a free ticket or two! https://t.co/XUNOz29gkO